While I was reviewing first posts in Ask Ubuntu, I had to review this post. I commented asking for a screenshot for reference and then I clicked I'm Done and then I got this: 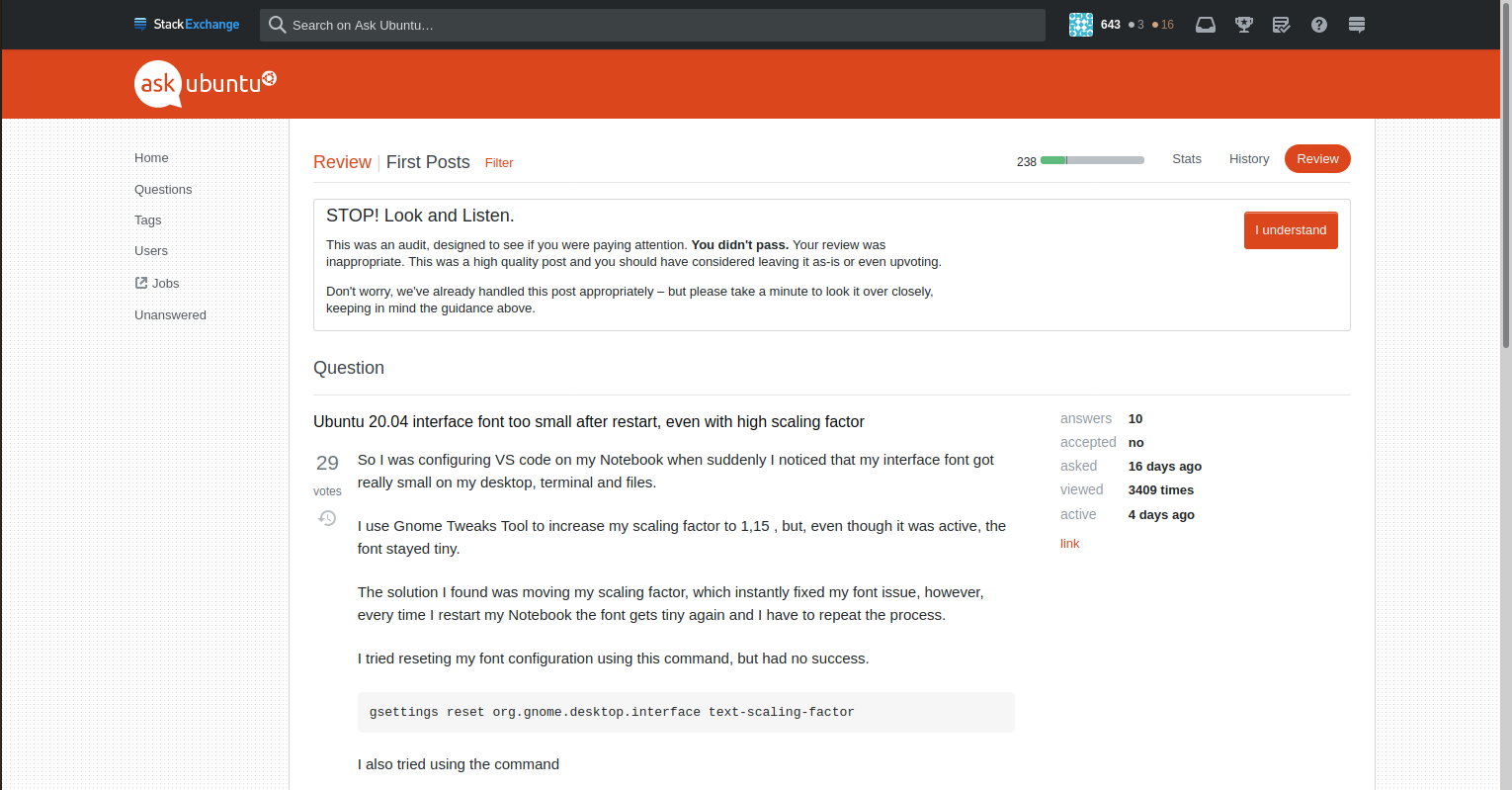 Link to the audit task: https://askubuntu.com/review/first-posts/1081201

I certainly don't think it's wrong in any way unless the comment is vague. And I don't think the system checks the relevance of the comment (Is it even possible to do?). Or am I mistaken?

I know that the system is not perfect. But sometimes, these kinda situations annoys the user (who is reviewing) and maybe he/she can stop reviewing the posts just because the system comes to a conclusion without understanding the context of the situation.

A reviewer lost is never a good thing for the system.

What can Ask Ubuntu do to improve the system?

Yes, you're right, it makes no sense at all that trying to add a comment causes you to fail an audit when the post is high quality. You are also right that the system does not read your comment to see if it is reasonable (also, on a personal note, if commenting is going to cause me to fail an audit, can I please fail as soon as I click add a comment instead of when I try to submit the huge comment I spent 10 minutes composing?).

The most upvoted answer (at the time of typing this) to the post Kulfy linked to refers to a problem of people trying to quickly pass audits by doing an action that will reliably pass all audits. But this is a very very bad reason for making an attempt to add a comment fail an audit where the post is supposedly high quality. Instead of that, we could give new reviewers better guidance, and provide better tools for moderating reviews to more users.

I don't know what we can do to improve the situation. Someone (which could be me, or you, or anyone else) could post a feature request asking for attempting to comment on a "high quality post" audit not to fail the audit.

FYI, mods have almost* no special powers to decide which posts will become audits or to remove them. There is a general way to somewhat avoid bad audits being created, which is the community handling all posts correctly, but even that would not help with this particular situation.

However, we can escalate feature requests and probably complain about stuff on your behalf more influentially to people who might be able to do something (although such people are at present extremely overworked and lacking time to take on new stuff, I believe).

*I say almost, because posts that have at least one validated rude/abusive flag are not used in audits (so you hopefully don't have to see horrible things just so the system can attempt to check you are reviewing properly), and mods have significantly more power than other users to validate such flags.

7
Review Audits - room for improvement
12
Behavior of Site when Marking Test Questions as Duplicates / Commenting on Test Questions
7
Failed first post audit by flagging as a duplicate. Is it correct?
6
The review-queue audit-system fails users for making a comments
6
Some new weird review ban
0
Why did 'the system identify' a high quality post 'as possible spam' in review audit?
5
What happens if I flag a high-quality post in a review audit?
8
What's the "expected" audit response to spam in the LQ posts review queue?