There is the lts tag:

The LTS (Long Term Support) releases that have come out so far include:

Unlike regular releases of Ubuntu, LTS releases can be upgraded directly from one to the next, without the need to upgrade to all intermediate releases in between.

This tag wiki is 2 years out of date, doesn't know about Ubuntu 14.04 and seems to have no purpose. The times lts is used is almost always with an LTS version - mostly 14.04 at the moment. The tag except of 14.04 says "The current LTS (Long Term Support)" so tagging with lts seems really redundant: 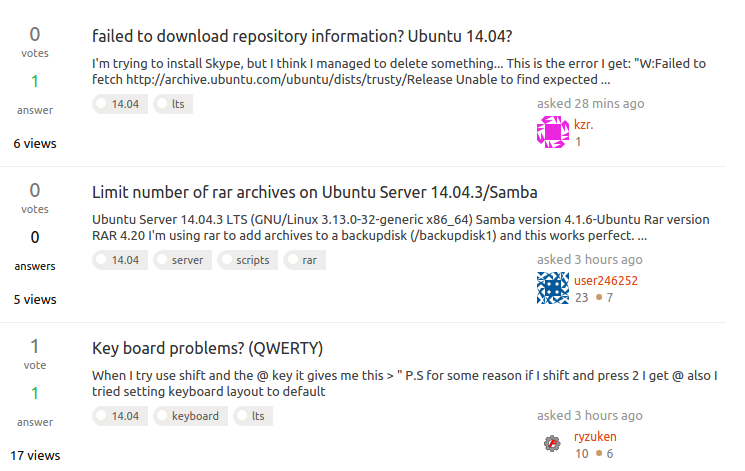 I can't imagine someone being an expert in lts who wouldn't be watching out for 12.04 or 14.04 questions. It has 7 followers.

Please can this tag be blacklisted?

IMHO it's a useless tag.

We should burn it in favor of the more specific tags 12.04, 14.04, etc. I have to agree with @NathanOsman when he says "I can't think of a legitimate reason for using this tag that wouldn't be covered by something more specific."

It seems to me that the only good use for it is any questions related to upgrading to/between/from LTS versions, so perhaps we could blacklist it and create lts-upgrade instead.

Not the answer you're looking for? Browse other questions tagged discussion tag-block-request .

25
EOL Notice: Hardy, Oneiric, Lucid (desktop) are now End of Life
1
There are questions being closed as EOL when they are still supported
3
Which questions should get the release tag "14.04"?
9
Is it acceptable to copy other user's common, moderation-related comments?
15
Policy Change Proposal: "End of Standard Support" for ESM releases is effectively the "Not Supported" date for a release on Ask Ubuntu
0
Should we make an exception to our general end-of-life policy for the 18.04 release?