When moderators convert an answer to and edit--which deletes the answer and places its content at the end of the question--do they have the ability to move the comments from that answer to the question as well? Or are these always lost? I know that converting an answer to a comment allows its comments to be preserved; does converting it to an edit allow this, too? I'm asking because this will sometimes affect how I flag. I won't ask moderators to do this if they can't actually do it.

As some background (to non-moderators reading this), moderators can convert an answer into a comment on some other post. This is occasionally done to preserve content posted as an answer that doesn't attempt to answer the question but is otherwise valuable. When doing so, they can either leave its own comment replies intact as additional comments on the same post. I don't know the specific details of how each is achieved, but I've seen both done. On the occasion that I raise a custom "in need of moderator intervention" flag to ask that an answer that's been commented on be converted into a comment, I often specify whether or not I think its existing comment replies should be preserved.

Moderators can also convert an answer into an edit on the question if the answer is posted by the OP. Self-answers are good, but sometimes an asker posts additional information about the problem that doesn't include a solution as an answer, when it ought to have been an edit. 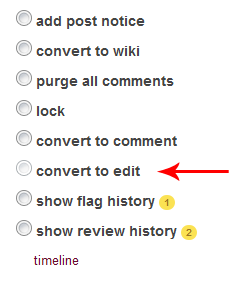 Screenshot copied from Why was the “convert to edit” action disabled? by Mr.Wizard on MSE.

I'm not suggesting that, if this can be done, then it ought to be done more often, nor even that the system should necessarily allow this. I'm just asking if the system does allow moderators to do this. I presume that doing so would sometimes intersperse comments on the post-made-edit with comments on the question and create confusion, so this ability would have to be used carefully.

The specific posts that motivated me to ask about this are Where are my iptables? and its answer by the OP that should have been an edit (which we've deleted but can be seen here). I'm not totally sure that the comments on that answer should be placed on the question itself, but as I was thinking about it and considering raising a custom moderator flag, I realized I did not actually know if moderators have this ability.

No, the "Convert to Edit" button does not let us do anything with comments.

Not the answer you're looking for? Browse other questions tagged support editing answers comments moderation .

1
My comments are being posted when I move to another window...
6
Does AskUbuntu encourage deleting old comments?
6
How can I move a discussion from comments to chat after the 'move this discussion to chat' link has disappeared?
14
When are "you can do this different thing instead" answers considered good?
47
PSA: When reviewing, don't post duplicate (and near-duplicate) comments!
13
Suggestion: Use pro-forma/"review" comments when flagging certain answers
8
Are people getting "rep shy"? || About "commentswers"
4
What to do with answers that should be comments, but get deleted?
5
What to do with stolen answers?