As one is off-topic and the other is on-topic, how do we know the difference between the two? Do we just assume that it's 12.04.5? What do we do?

On the one hand, someone having problems installing from, or working in the live environment of, non-point-release media (or media from earlier than the current point release) should be referred to the point release ISOs, which contain updated packages that may fix some problems. Even that is not really an issue of site scope; it's just a good idea to try with updated packages when you're having problems.

The the difference between earlier and later point releases in an installed system is merely one of patchlevel, with one interesting exception.

The exception is old HWEs. When people say old point releases of 12.04 are end-of-life, usually they are talking specifically about the HWEs associated with those versions.

Hardware enablement stacks (HWEs) for old point releases are end-of-life and questions about problems with them (other than how to upgrade them or stop using them) should likely be considered off-topic. I believe the EoL status of old point releases' HWEs are the reason EoL dates for 12.04.1-4 are listed on the releases page: 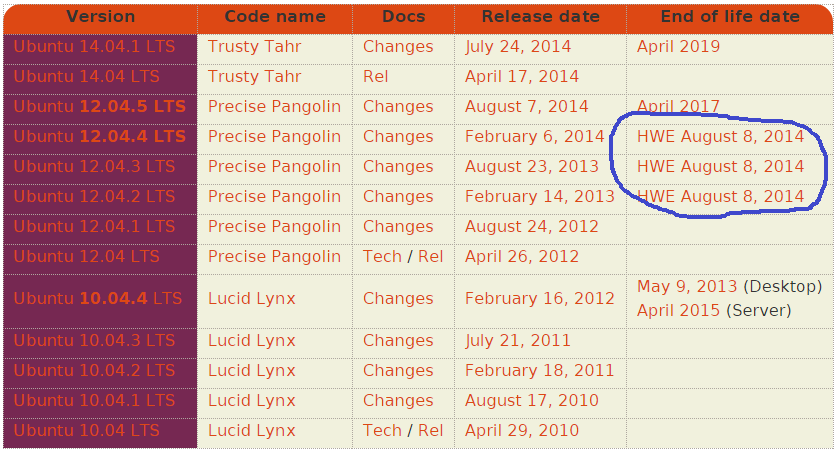 You'll notice that these dates are specifically given for HWE, and not for the point release as a whole.

Why HWEs are special and can become EoL.

The 1204_HWE_EOL wiki page1 explains how and why HWEs become end-of-life (emphasis mine):

The HWE path can be obtained in 2 ways:

That is, the HWEs for old point releases provide kernels backported from now-EoL Ubuntu releases. So it makes sense that they are to be considered EoL.

Even for a system that does have an old HWE installed, 1204_HWE_EOL is quite explicit about the limited extent to which this renders them unsupported:1

Not true. Such a system will only stop receiving updates for the kernel and the graphics stack. The rest of the software will continue to get updates.

Not true. 12.04.3 is not 12.04.3 HWE. And since HWE (and thus a new kernel series) cannot be introduced through regular package updates it is possible to update a non-HWE system to arrive at a later point release, such as 12.04.3, and still preserve the EOL date of April 2017.

So this is an issue of specific packages being considered end-of-life, and this would only affect HWE-related questions.

1Blockquoted portions of 1204_HWE_EOL by "Contributors to the Ubuntu documentation wiki," reproduced here as permitted by CC-BY-SA 3.0.

Not the answer you're looking for? Browse other questions tagged discussion scope end-of-life .

6
How can this duplicate attract much more traffic than the linked question?
7
Quantal -> Raring -> Saucy upgrade path, how?
1
There are questions being closed as EOL when they are still supported
3
What does "version-specific" mean in "Only use version tag if the question is version-specific"?
23
End of Life for [lts]?
1
What are the differences between Ubuntu and e.g. Mint?
19
How should we handle new and future questions about Ubuntu Touch?
6
How is this question "off-topic"?