I was audited by the review system with this question. I decided to flag it for closure because the problem had "gone away". When I did so, I got this education...: 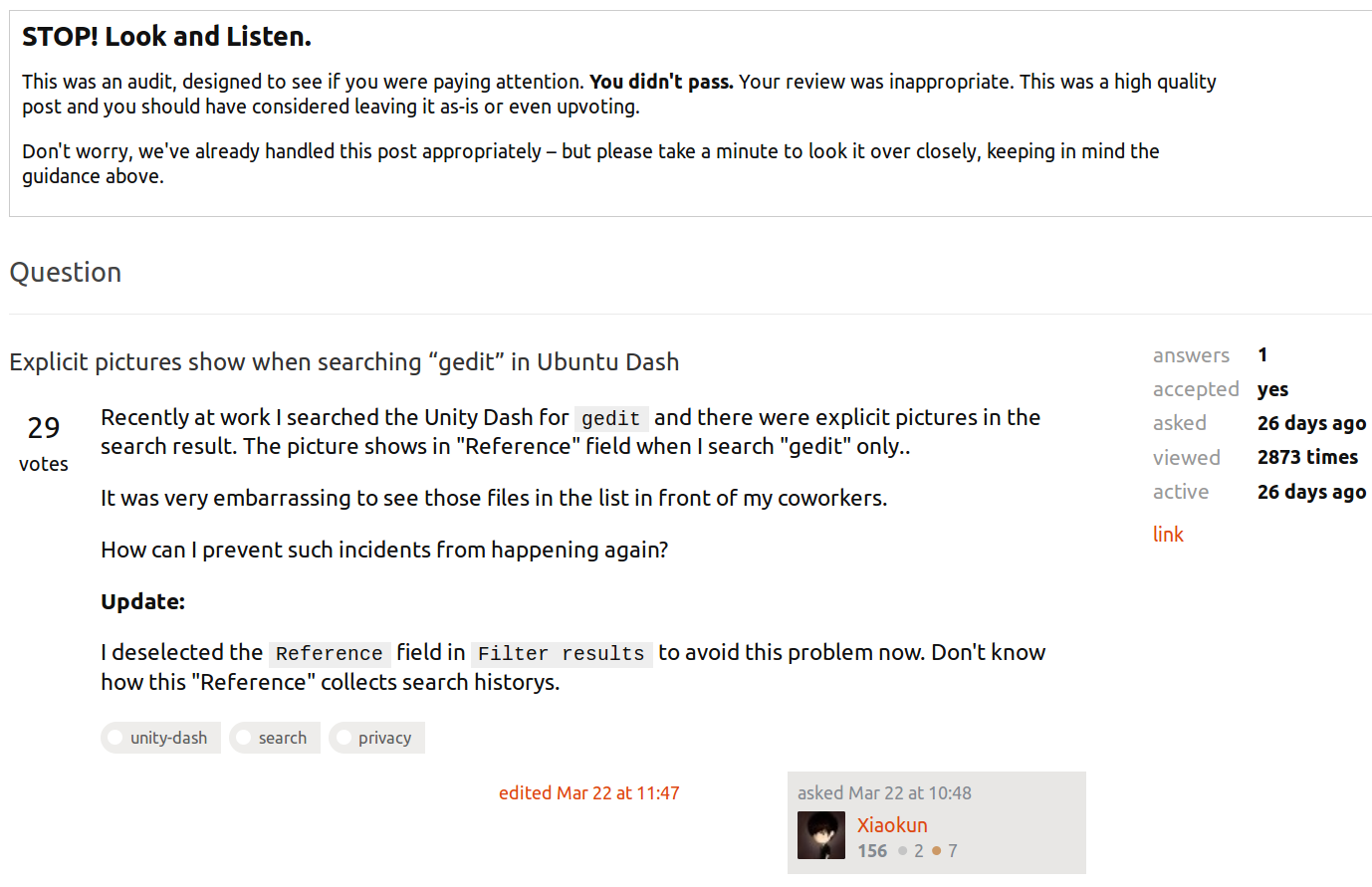 From my point of view, this question is not high quality nor a good subject for a audit. Who flags question to be usable for audits? What kind of consequences does failing one have?

Audits are completely automated. They'll pick "known" good or bad posts (based on previous actions) and test you. There are also some random insertion tests in the suggested edit queue.

This was one of the known good posts, to catch people who are trigger happy with closure.

I think this is one of those rare injustices the audit system occasionally springs. I think you were also caught out by the wording of the update. Even with the workaround, there remains a question that warrants answering (Why the hell am I seeing penises when I search for gedit?)

There's nothing I can do to remedy you having fallen into this one, but we can work on improving the question to make sure future reviewers don't have the same problem.

I'll edit it up but contribute if you feel you'd still vote to close it.

And just a reminder: the odd failed audit isn't the end of the world. There are much trickier ones than this and I think all the mods have at least a few failed audits on record. The system only takes notice if you fail many within a period of time.

I decided to flag it for closure because the problem had "gone away".

Not quite. The problem still exists. What fooled you is the fact that the question also contained the answer. You interpreted "If I deselect the Reference field in Filter results, these explicit pictures go away" as the problem had gone away, which is undeniably true, but it indeed needed a workaround to be applied before doing so, so the question technically didn't fit the close reason:

This describes a problem that can't be reproduced that seemingly went away on its own or was only relevant to a very specific period of time. It's off-topic as it's unlikely to help future readers.

However I agree some reviews are tricky / misleading / inevitabily lead the reviewer to fail. In this specific case the system did the job well, but only for coincidence. Whatever initially apparently weird (read as in "interesting") question may get a number of upvotes high enough for it to become selectable for an audit even if the real problem is something pretty dumb like a typo, however that specific case is (luckily) pretty rare.

9
What is a good attribution while reusing StackExchange content within StackExchange ?
47
PSA: When reviewing, don't post duplicate (and near-duplicate) comments!
13
Am I reviewing the Low Quality Queue properly?
9
Accepted answer that you don't agree with during review audit
2
Trick reviews are not helpful
7
Seeking support/feedback about closure flags not resulting in a page closure
6
Some new weird review ban
11
Is it wrong to comment in a "high quality post" in a review test (audit)?
5
What happens if I flag a high-quality post in a review audit?