Can we increase the capacity of our Suggested Edits queue?

Lately a few folks have mentioned that they were unable to suggest edits because the queue itself was full. Apparently, the Suggested Edits queue is only allowed to contain 40 items.

That seems low for Ask Ubuntu which is busier than all but two of the other Stack Exchange sites (Stack Overflow's queue has a capacity of 500).

People frequently hitting the queue capacity limit before the per-user limit (a user is only allowed to have five pending edit suggestions) seems bad to me. While we could definitely use more active reviewers of several of the queues including Suggested Edits, I believe suggestions would still get cleared promptly if the capacity were increased. According to my stats about 1320 reviews have been done in the last 30 days (which is 44 per day). I think it would be safe to increase the capacity of the Suggested Edits queue to at least 50.

What do y'all think?

I think the immediate need for this has passed but let's look at some data since we're here and I've been looking at data.

This is that graph Zanna mentioned in her answer. This is suggested edits per week from July 2019 until today:

I'm guessing that I'm looking at a slightly wider window that Zanna did because, while in the last year, there's been a decrease, the average per week is actually closer now to what it was in 2019. I'm not quite sure what was happening midyear in 2020 to cause such a huge increase in suggested edits, particularly from anonymous users at that time but... there you have it.

I do agree with the assessment is that fewer people are reviewing - or at least, that fewer reviews are happening. Based on another query, I can see that y'all did have a period where you were hitting 40 on some days, and that's when this post was written. The immediate impact of this post, though, is that y'all haven't hit 40 since. 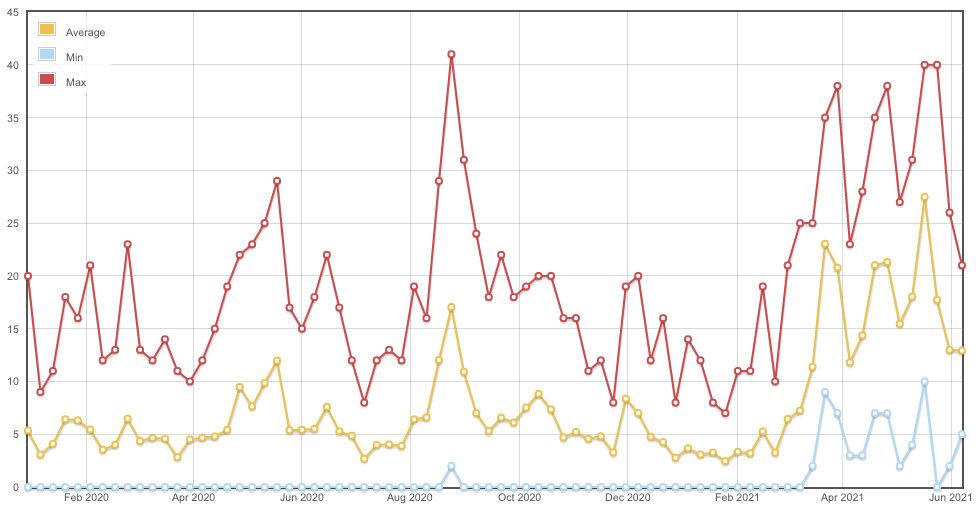 The chart above shows the maximum, minimum and average number of reviews in the suggested edit queue over a week. You can see that there were two recent weeks that reached 40 and two others that got very close. When we zoom in, as in the next chart, you can see that the last time y'all hit 40 was on May 24th, but, over the last week, y'all have stayed at almost half the cap, even at the max, with the recent high on June 6th of 25. 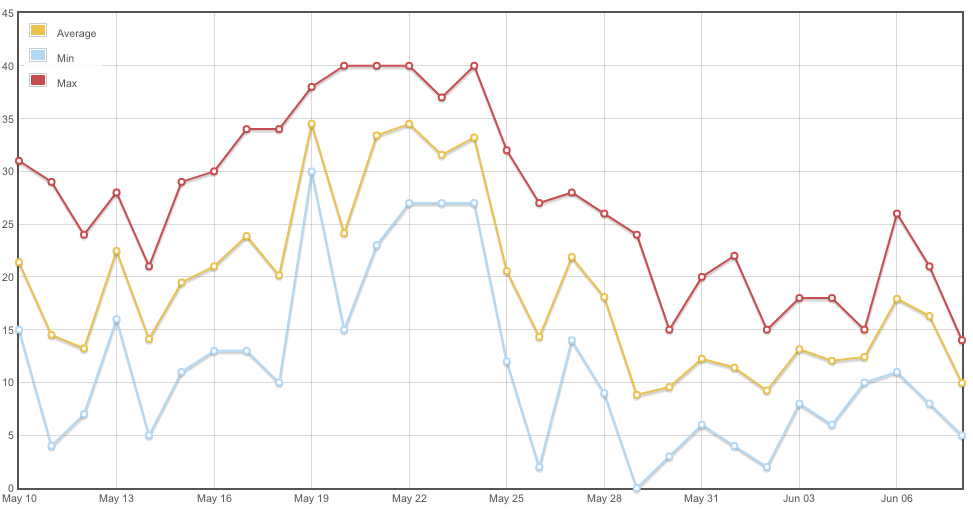 I'd also point out that y'all are clearing the queue entirely or nearly at times, which wasn't as common since the big increase in pending reviews in March. So, good job to you all for answering the call, and thanks to Zanna for bringing this to the community's attention.

So, since it seems like y'all have it under control, I think I'm going to leave the setting where it is for now. Let me know if you have any questions. :)

jokerdino pointed out some more data to me, and we noted that the number of suggested edits being made per day/week/month has actually been gradually declining at least since 2015 and is currently at a particularly low level. The fact that people are running into the queue size limit in these circumstances indicates that reviewing of the queue has declined even more than suggestions.

In the ancient past, there was a number in the top bar indicating pending suggested edits, to encourage people to review them promptly. During my time, thousands of years ago, I feel like that number rarely reached double figures, although there were more suggested edits per day back then. The redesign of the top bar both removed that indicator, and also made the review queues less discoverable by changing the labelled button (it said "review") to a mysterious icon. This may partly explain the decline in reviewing, in addition to many people having recently reduced or redirected their activity (including me - these days I mostly handle flags and stuff).

Therefore, in addition to increasing the queue's capacity (or even if we leave that as it is) we need more reviewers!

14
Please explain the rejected outcome for this suggested edit