Is there a `dark theme` for https://askubuntu.com similar to whats available on https://stackoverflow.com/

Luckily there is a dark theme available for https://stackoverflow.com/ as per 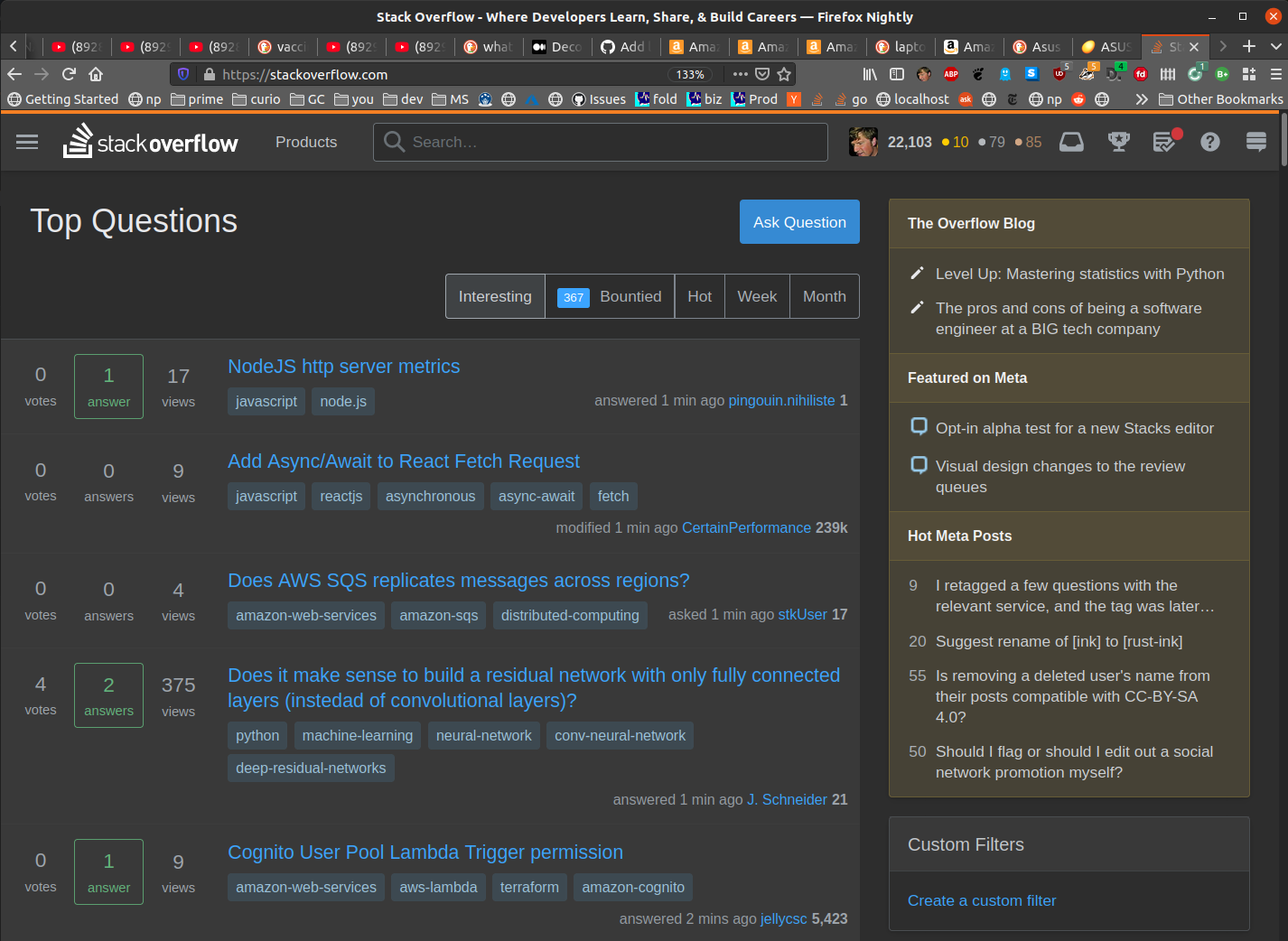 Is there a similar dark theme for https://askubuntu.com/ ? if so how to navigate to engage ?

Some new features, such as following questions and answers, are very easy to roll out across the entire network. Just update the codebase and it works. Dark Mode is sadly not one of those things; they'll have to go over all the sites individually (at least the ones with a custom design) and tweak the colors and images.

Some relevant references: the announcement of Dark Mode on Stack Overflow:

At this point, the focus of Dark Mode is on Stack Overflow and we’ll eventually bring it to MSO. While the retheming we did across the network two years ago makes updating our LESS easier, creating dark versions of all of our sites, particularly the custom-designed ones, is going to be a huge challenge we’re not able to contemplate at this time. The artwork on some of those sites simply can’t be made dark because we don’t have access to the original art files and, to be honest, some of the themes will always be better as-is.

and a discussion on a community feedback post, with an answer by a staff member:

Q: You mentioned paying off a lot of technical debt to implement Dark Mode on Stack Overflow. How much of this effort would be useful in expanding Dark Mode to the entire network? For example, would you need to re-implement it mostly from scratch on each individual site, or is there now a Dark Mode Module that can be installed, tested, and tweaked pretty much anywhere you want to with a much smaller amount of effort than was necessary to implement it the first time around for Stack Overflow?

A: From talking to Aaron... it's kinda complicated. We can't just turn a lot of sites dark because their artwork was designed with light mode in mind (excepting for Science Fiction & Fantasy, for the most part). So plopping dark mode on, say... Worldbuilding or English Language Learners or Seasoned Advice... would be pretty impossible without redoing their artwork... again. This is one of those... rare cases where beta sites have a leg up... :)

Ask Ubuntu has a fairly basic theme so it's probably one of the easiest sites to convert, but it will take a while before they'll do it (if they are going to do it at all).

8
How do you challenge a ruling?
4
Do we need a canonical question on common fglrx driver issues?
44
Dark Theme Ask Ubuntu
1
Should the help-center's question-related guidance promote including Ubuntu flavor and version in questions?
0
Ask Ubuntu logo download link
6
Are questions about configuring KDE On-topic on Ask Ubuntu?