The "seemingly went away on its own" close reason is being abused. Again

When should this be used?

When a problem goes away and nobody knows enough about why that an answer would likely help anybody else, voting to close as off-topic with the "a problem that can't be reproduced" sub-reason is appropriate.

Often, when the OP solves their own problem, people vote to close as "a problem that can't be reproduced." That's wrong. When the solution might help others with the same problem, the question should be answered.

This is actually totally off: firefox can't the server at start.unbuntu.com 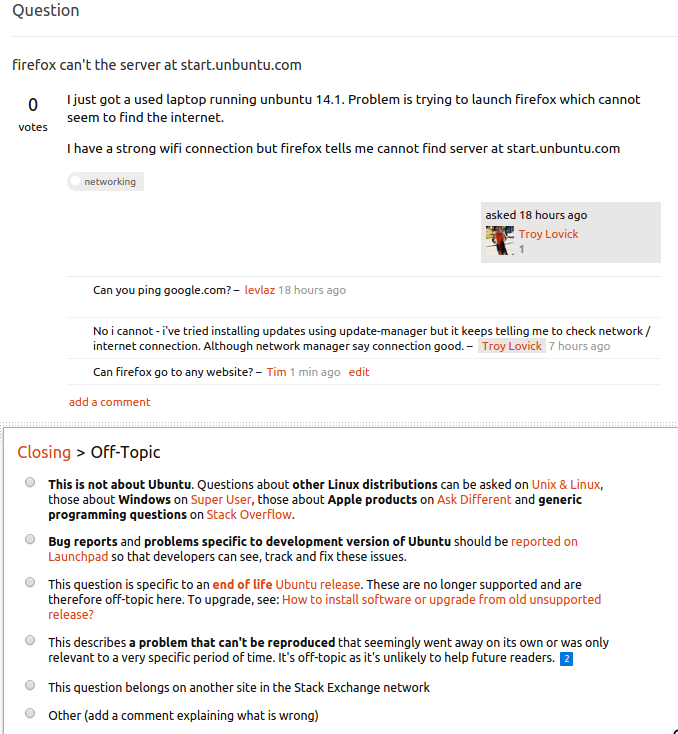 It was asked 18 hours ago. He replied 7 hours ago. He has not said that he can now access start.ubuntu.com. I can't see anything there suggesting that his issue has been resolved.

This is another example:

Can I change or replace Unity Launcher Dash behaviour?

Okay, so it was asked a while ago. But how has it been resolved? Has anyone asked the OP if they have solved the issue?

Reminder. The only time you should use this reason is when a problem goes away, and the solution is not known.

And why "again" in the title?

For the second example, OP had this to say in the comments:

Following @xangua's advice decided to switch to xfce, configured it to my needs and everything works fine now, so I voted to close it as it doesn't bother me anymore. Though maybe somebody in the future will be interested in the same so decided not to delete it.

Not the answer you're looking for? Browse other questions tagged discussion close-reasons .

5
Should questions describing problems that mysteriously went away be closed?
8
Is it proper to closevote one's own questions?
12
Custom close reason review
12
A flag in the Off Topic flag menu that shouldn't be there?
1
The close reason "Off topic" -> "Bug reports..." is still confusing
22
We should be able to vote to change the close reason
17
When do we say a problem can't be reproduced?
2
What is better: Answering questions from OPs edit by a contributor or motivating OP to write his own answer?
17
Improving question closed banners for most users - short wording needed for site specific reasons