How do we change the policy of Ask Ubuntu if votes are low in Ask Ubuntu Meta?

Since important policy decisions regarding Ask Ubuntu's scope are taken using voting in Ask Ubuntu Meta, it's important that as many people as possible participate in the discussion related to changing policies of Ask Ubuntu in Ask Ubuntu Meta (by voting/commenting/some other way). (Something related: What is considered a community consensus on Meta?)

Here are the above results as a graph to make things more clear: 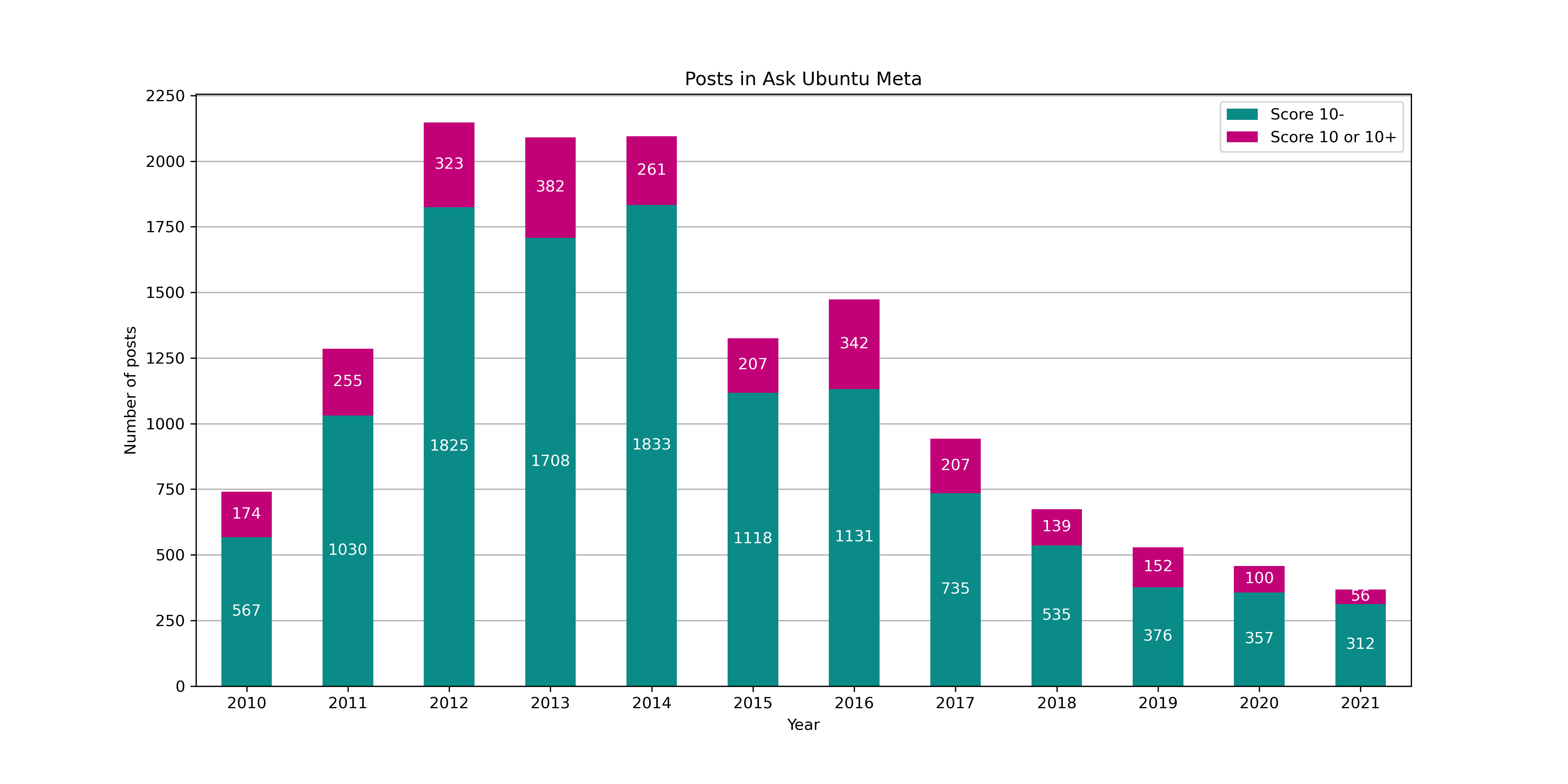 Note: The data might change a bit if the old posts get upvotes/downvotes.

There were days in Ask Ubuntu Meta when posts (which are not even related to policy decisions) had chances of getting more than 70 votes. [Example (excellent answer by Zanna)... Gone are those days!]

The recent policy change proposal just got approximately only 40 votes and this is sad to see. The 10 years anniversary post got more votes than it.

I might be judgemental to compare the state of Ask Ubuntu Meta just based on votes. But I feel that the active users of Ask Ubuntu Meta do know that other forms of interaction (like comments, answers) too have decreased substantially in the recent past.

I could not find any SEDE data about this (or I didn't search properly). So, I found the data manually from https://askubuntu.com/election.

Let's look at the data graphically: 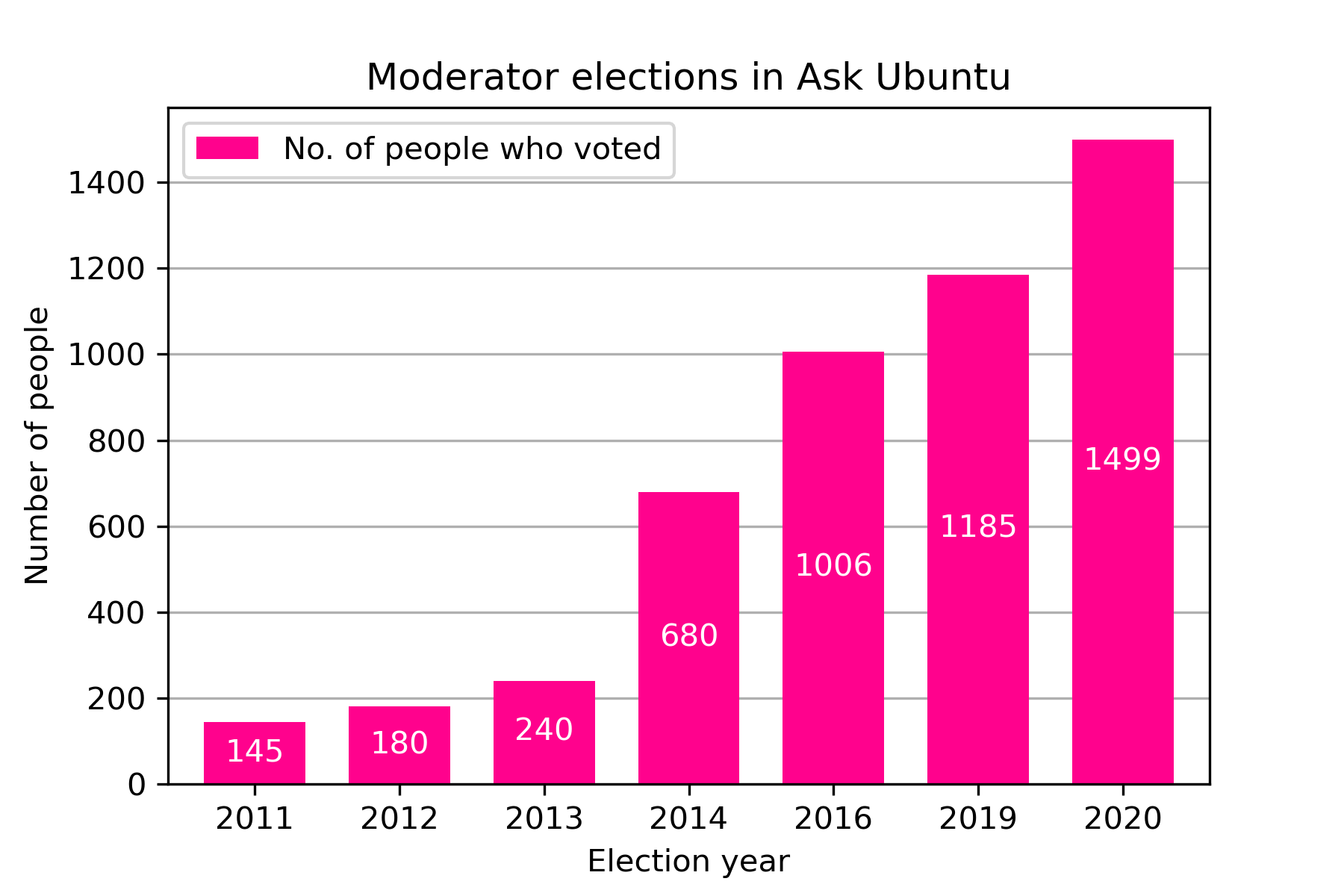 After looking into the data, these are the questions which I have:

Thanks for posting about this topic. I think it is a real problem that meta participation has declined, because if a smaller proportion of site users participate in meta, the site becomes less democratic.

As you mentioned in a comment, meta is not very discoverable. It became less discoverable in October 2017 with the implementation of the new top bar which, in my opinion, was a disaster for community moderation, because the meta and the review buttons that had been in the old top bar, encouraging people to participate in improving the site, disappeared.

I wanted to know whether meta participation had decreased relative to main site activity since the top bar was redesigned.

BeastOfCaerbannog kindly made this wonderful graph showing how the total numbers of posts on main and meta changed over time: 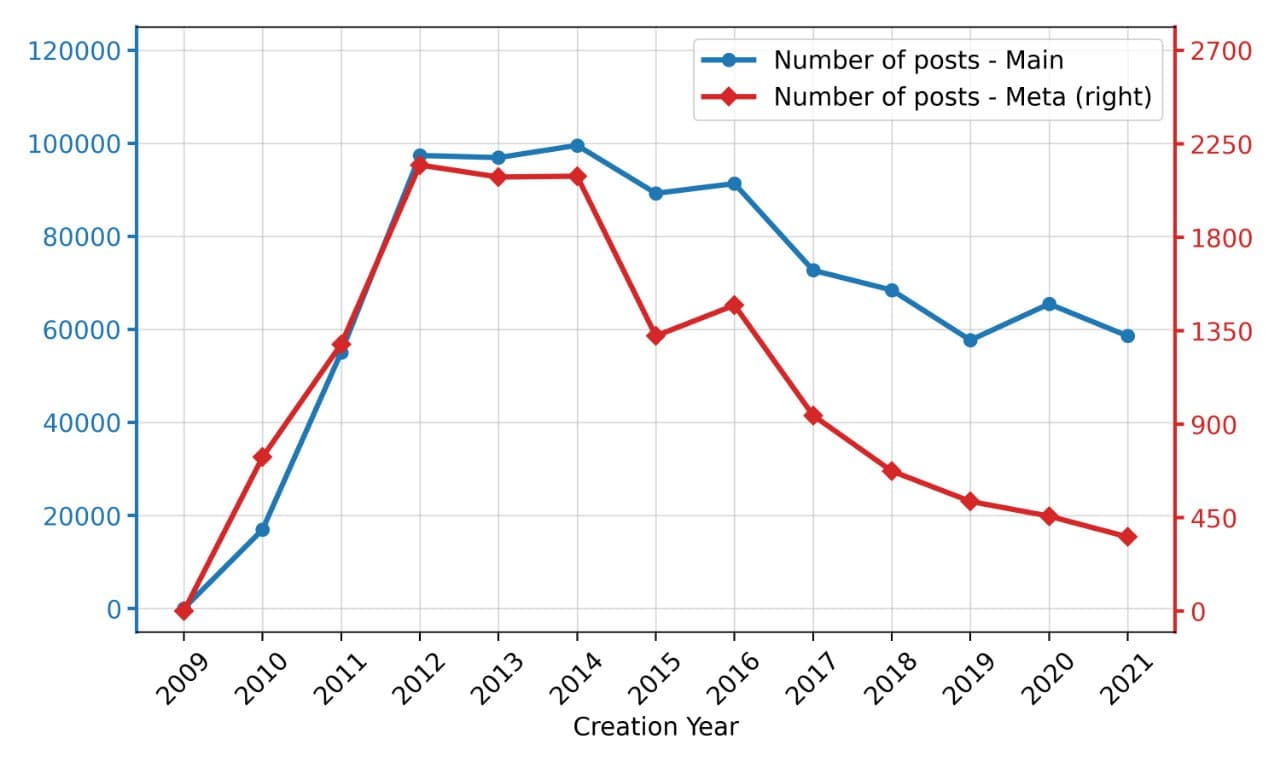 The last five years show a divergence, where activity on both sites declined, but meta activity declined more.

With regard to the question of how we change policy, I don't think that I have any fresh insights. That earlier question you linked to has answers that I more or less agree with. At least, I don't know a better way to reach a policy decision than through an open discussion on meta, where all and especially dissenting views are taken seriously and addressed. We can probably work on doing that better.

But your question leads to a more practical question: how do we let people know that meta exists, that they can come here to ask for change? Perhaps we can investigate whether other sites across the network have seen a decline in specifically meta participation and seek design improvements that could address it.

In the meantime, we can continue to feature important posts and perhaps try to take opportunities to mention meta in comments to let new users know about it.

People not voting on site policies and more generally not taking part in Meta means they accept how site policies are being managed, else they would engage and vote.

As far as specific questions to be featured, I think just requesting it in a comment on the question seems appropriate as mods are suspiciously omnipresent.

44
Why are there so many helpful people?
15
Policy Change Proposal: "End of Standard Support" for ESM releases is effectively the "Not Supported" date for a release on Ask Ubuntu
57
Happy 10th anniversary to Ask Ubuntu!
20
What is considered a community consensus on Meta?
11
What would you like to ask the Stack Exchange Community Team?

12
Should we have an Ask Ubuntu Beginners event?
8
Can we update the FAQ to reflect the apparent change in EoL policy?
5
Shall we try and clean the close vote review queue to start the new year?
28
What's wrong, Ask Ubuntu?: Low Voter Count
20
What's wrong, Ask Ubuntu?: The "Tech Support" Impression
22
2020 Potential Moderator Election: Community Interest Check
9
Shouldn’t we lower the close/reopen vote threshold?
9
Is Ubuntu 14.04 off-topic on Ask Ubuntu?
15
Policy Change Proposal: "End of Standard Support" for ESM releases is effectively the "Not Supported" date for a release on Ask Ubuntu