Why have I just received another two Marshal badges?

Why have I just now received another two Marshal badges? I got my first a few months ago. Surely you should only ever get it the once. 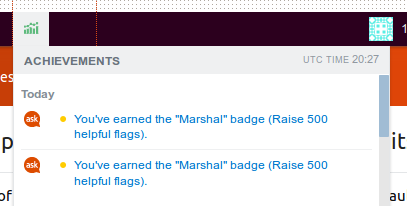 We just did a major revamp of how badges are awarded behind the scenes to drastically reduce the load on SQL Server. It now takes advantage of some pre-compute work we're doing to track badge progress in the profile.

However, I screwed up 2 queries, specifically the text names of the badges that prevent duplicate awarding. I was thinking to myself earlier "hey, maybe we should pass these in" as part of the rewrite - but it's not quite so simple. I'll take another look at this soon but when we're not fighting fires from a SQL Server upgrade. The cardinality changes which hosed some of the bigger badge queries needed urgent attention here, which ended up as a major revamp and introduced the 2 errors reported here.

4
My badge count is probably wrong (too many gold)

12
May we please have another font for the body text?
14
Is it a good or a bad sign that I get the "notable question" badge for a zero-votes question?
7
The "contact us" link in the User Merge help page links to itself
3
I didn't receive the notification that I'd gained a badge
25
Please revert merging amd-graphics tag into ati
12
Behavior of Site when Marking Test Questions as Duplicates / Commenting on Test Questions
2
Not getting some of the comment and badge notifications