According to Ability to close a question as a bug report, its speculated that closing as a bug better serves the community's users.

I'm finding the exact opposite in practice. That is, the bug reporting and triaging sucks for getting help, and the best help is provided the Ask Ubuntu community. I have some reasons for making the claim, and I'll enumerate them here. As a side note, I would also enjoy seeing the evidence that supports the current policy.

The most compelling example the bug tracker sucks for help is the number of bugs that go unacknowledged and untriaged. For example, below is the latest from what I've reported. Of the 27 non-wishlist item, only 11 have been acknowledged, triaged or are a work in progress. That means 16 have not even been acknowledged. 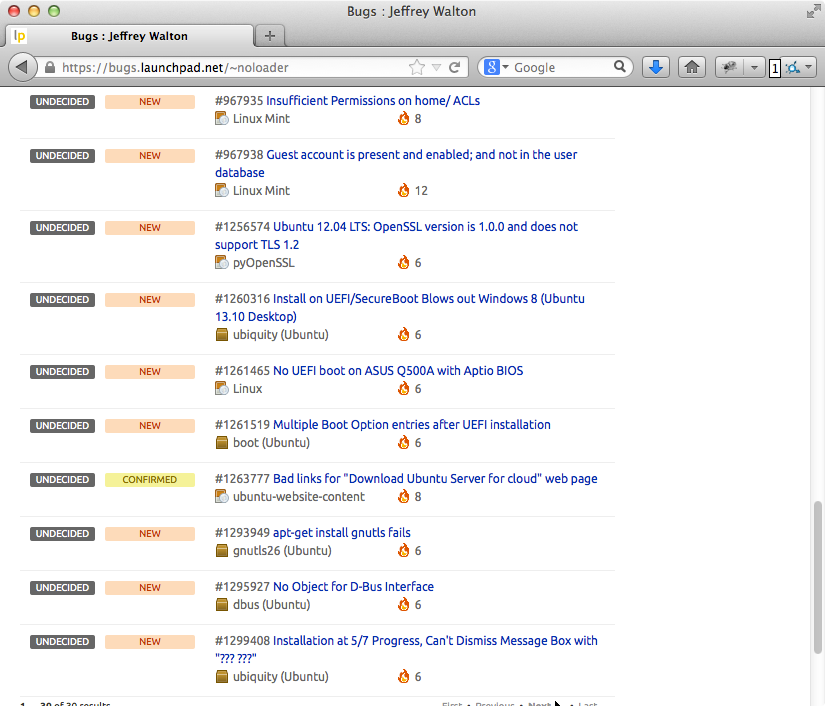 Bugs fixes are often not applied to current releases, so the broken stuff stays broken. For example Server 13.10 Install Fails with USB Keyboard (Appears to Hang) was never fixed in Ubuntu 13. It does not help a community member find a work around.

As another example, a bug in GRUB that's present on 12.04 LTS remains unfixed in 12.04 even though the report is years old. The fix is supposedly checked in elsewhere, but it was not provided for 12.04. Keep in mind this is supposed to be long term support.

In contrast to the bug tracker...

As far as the reason:

I'm more than happy to share information and workarounds provided by the Ask Ubuntu community with the developers and the bug tracker. But it appears most of the shared information probably won't be utilized because the bugs are not being tended to.

Speculating that some questions are bugs is simply wrong. There seems to be a lot of that speculation with respect to some of these questions. And folks won't know if its a bug until its examined. Prematurely closing a question surely does not help a Ask Ubuntu community user.

As show above, there's no guarantee a bug will be acknowledged, that it will be triaged, that a work around will be offered, that a bug fix will be checked in, or that the fix will actually work. Prematurely closing a question surely does not help a Ask Ubuntu community user.

This seems to be very relevant for this point: Can we reopen this “bug report” that isn't being fixed?.

Stack Exchanges are useful for users. They are easier to navigate and understand than typical bug reports. For example, Ubuntu 10.10 upgrade results in blank screen after login and Server 13.10 Install Fails with USB Keyboard (Appears to Hang). Both are Ask Ubuntu questions and answers that refer to a bug report if the poster is interested.

Providing information on Ask Ubuntu is likely more helpful to users than making them search bug reports. Especially those users who are not computer savvy.

According to Ubuntu's Help and information:

AskUbuntu and Ubuntu Forums are great sources of answers to common questions about installing, troubleshooting and optimizing Ubuntu.

Ubuntu's help page appears to indicate Ask Ubuntu is a place to find help; and not bug trackers.

However effectively you think bug trackers are used, depriving them of original bugs hurts Ubuntu.

Now, if a bug is already reported, and the question isn't super-lazy, you can answer something like this:

This looks a lot like it might be Title of the bug report. It is responsible for this, that and the other and exists because of this explanation.

There currently aren't any was of fixing this but subscribe to the bug (link how) and you'll know as soon as it's been dealt with.

(Obviously if there is a way to directly help fix it at that point in time, explain it.)

Or dupe against a question already has that. I've already explained that I consider these a million times better than blankly closing and having the OP post a duplicate bug on LP.

If it sounds like I'm arguing both ways, it's probably because I am. Being helpful directly is great but we also have to be realistic about the type of question that can be meaningfully answered here. And how that feeds back into the Ubuntu lifecycle.

Does that mean exposing users to a side of Ubuntu they're unfamiliar with? Sure! But teaching people how the meat's made isn't a bad thing.

This isn't a bug, this is intentional Ubuntu behavior: Why can other users see the files in my home folder?

Also that bug isn't filed against Ubuntu, so none of the Ubuntu squad members are even going to see it.

As for the other ones, I don't really see how reposting bug reports here will help anyone, all it will do is drive users away. And by users I don't mean the people having the problem, I mean the experts that answer the questions. No one wants to work in a bug tracker all day, and then come to AU and end up with even worse bug reports.

I know it sounds cold but this site is not a bug tracker, it is not designed to be a bug tracker; forcing it into a bug tracker will just make it worse for everyone. We have no way of retracing stack traces here, no way to attach logs etc. And there shouldn't be, this site is supposed to be about helping people use their computer, not dart throwing bug fixes.

I have made the same experiencce and get the impression that the bugsquad and QA members are overworked or just to few.

I would welcome that the attitude of strict punishment would also apply to highly speculative closing (as in: look here, I found a bug on launchpad that contains one of the words you used) as it is non-constructive and misinformation too.

I wouldn't say that the close reason should be removed, but reworded or restructured. Preferably into two close reasons:

I'd love to see a mechanism or attitude to help getting new and unassigned bugs into work in progress state, because completely ignoring bugs (which is easy if you're not affected) will not improve the quality experience for Ubuntu users nor will it resolve any issues.

I find the current attitude of some members very premature, like getting a puppy for birthday but not willing to take it to the doctor to give it the medical care it needs for a healthy life or just cleaning up after it.

64
When are questions about "ubuntu+1" appropriate?
20
What's wrong, Ask Ubuntu?: The "Tech Support" Impression
14
Ability to close a question as a bug report.
8
When is a bug a bug?
14
Please try to read bug reports before voting to close something as a bug
1
Can we close as bug all the "appstreamcli" related questions?
2
Can we reopen this "bug report" that isn't being fixed?
0
Intermittent bug post closed for wrong reason

5
Do we need a linked report to close bug questions?
10
Ubuntu website recommends to report bugs on askubuntu.com?
1
Should questions be closed as bugs if the bug report doesn't list a confirmed status?
14
Please try to read bug reports before voting to close something as a bug
15
"Bug reports and problems with the development version of Ubuntu should be reported on Launchpad"
8
When is a bug a bug?
1
The close reason "Off topic" -> "Bug reports..." is still confusing
1
Can we close as bug all the "appstreamcli" related questions?