Errmm... I keep getting things like this on the review thing - it seems to be anonymous users spamming...

Here is a screen-shot in case the link does not work: 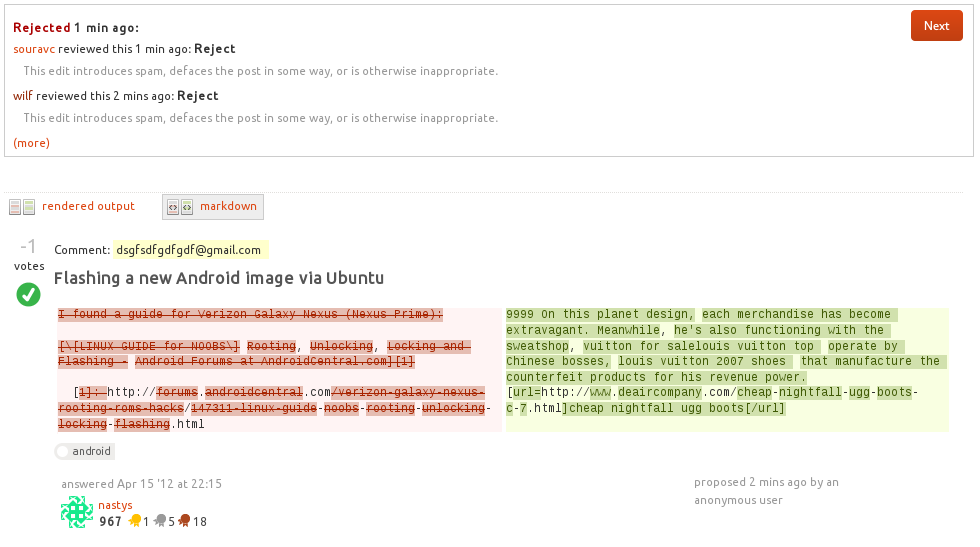 Is there anyway of blocking this?

Rejecting these as spam trains the spam filter, which very quickly keeps them out. It's very rare that the same spam network only targets one of our sites; those that hit Ask Ubuntu also tend to hit Magento and Stack Overflow, the sites all use the same spam data, so all benefit from the actions that everyone takes.

What you might see, depending on the size of the attack, is spam edits still in the queue from things that have already been blocked, it's just some of their edits linger. I'm looking at purging recent suggestions from blocked anon users, but that's ... a little tricky and somewhat dangerous.

We do a good job of quickly blocking it, what we're not so good at is quickly dumping it from peoples in boxes and flushing the remaining junk out of the queue - I'm going to try to get a solution for that in place (or at least planned for the very near future) by the end of the week.

We now have honeypots deployed, which detect these seemingly innocuous posts as targets based on activity, and deal a much harsher penalty to those that attempt to spam them after they've been identified as a target.

The actual parameters that go into 'what is a target?' are secret, but I can say that they very from site to site, depending on the activity that they see. They're also central, if you get blocked for spamming a honeypot on Drupal or Stack Overflow, you'll also be blocked on Ask Ubuntu (or the reverse of that).

There's still the question of getting better at auto-purging likely spam that blocked origins have 'contributed' in the hours leading up to their block - but this is sort of dangerous. We're going to continue to analyze how well the honeypots work, and go from there.

Still, this should prevent an even larger chunk of it from getting through.

3
Suggested edits: is this spam?

8
How do you challenge a ruling?
5
Is it allowed to have multiple AU accounts, intentionally, without having them merged?
9
Should spam posts be edited, or still just flagged?
3
Suggested edits: is this spam?
1
Suggested edit to "What does the double-hyphen do in `lxc exec`"
1
Strange: I have some pending edit review, but the review page says 0 suggested edits pending
3
Finding relevant aswers
4
Reputation requirement for a self answer?
6
Some new weird review ban