Very low quality flag on a closed question, can't do anything but invalidate the flag?

I got two VLQ flags in my queue... actually the question is impossible to understand by normal humans, but I can't handle the flag if I don't either, invalidate (which I will not), or add a spam/offensive flag.

What to do in such situations? 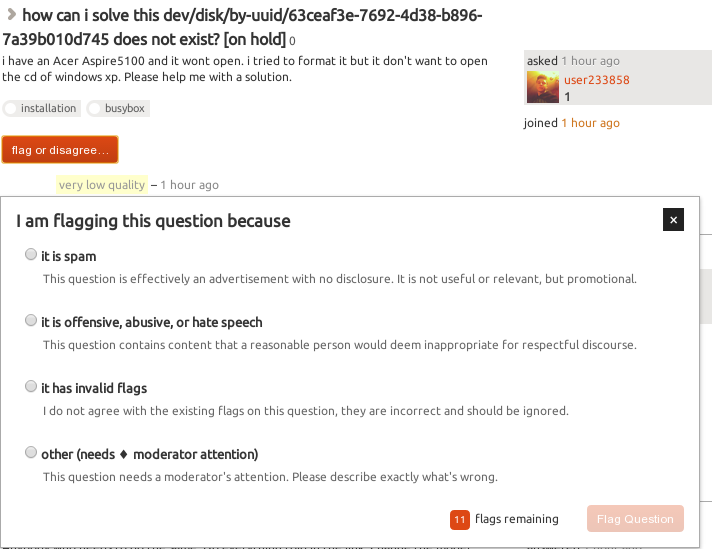 First, I recommend checking to make sure you can open up the post. Maybe it's been deleted already and is just sticking around in the flag queue for a short time. If that's the case, and it disappears from the 10k tools soon, then you don't have to do anything.

If the post still exists, then this is probably a bug in the Stack Exchange system. So in that case, I recommend reporting it as a bug on MSO. It will probably be handled faster there, plus it will be shown to many users from across the network who may have noticed something similar. (I recently reported a 10k tools flagging bug there, and it was quickly fixed.)

As for what to do about it in the 10k tools now, assuming you believe the very low quality flag should be actioned (or otherwise marked helpful), you can click other and raise a custom moderator attention flag to tell moderators what you think should be done with the post. Such flags are for situations where no other available flag adequately does the job, and this is certainly one such situation.

Finally, note that there are plenty of bad questions that should be/remain closed but where very low quality flags are not warranted. However, as far as I can see from this question, it really is pretty incomprehensible.

Not the answer you're looking for? Browse other questions tagged support bug flagging 10k-tools .

10
Should we commment on spam to get it deleted faster?
6
Should we edit offensive content that is only meant to vandalize the site?
1
What happens when I upvote a duplicate of comment?
0
Declined flag for new answer duplicating existing ones
2
Why my spam flag has been declined?
5
Very Low Quality flag still appears in the review queue
6
A VLQ flag invalidated by a minor edit
21
Please don't flag link-only answers as Very Low Quality