I was thinking about it after having had some harsh answer to some comment or edit of a question. There are a lot of questions from new users (and some answer) that shows that the user has not really understood the philosophy of the site (using it like a chat-like site, for example).

Suggesting (or even requesting, but I am not sure about this) to read the site help and acquire the "Informed" badge when a user post a question/answer without having it would greatly enhance the visibility of the FAQ and the rules of the site, and maybe help in auto-filtering some of the duplicate/too short/impossible to understand questions we see every morning...

This already happens at Stack Overflow (see New users required to take a tutorial on how the site works) and it doesn't prevent a truckload of crappy questions being posted on a daily basis.

AFAIK, the reasoning is that Stack Exchange lives of the traffic -and of actual visitors using the sites- and raising the bar or putting obstacles is considered counter-productive.

It's totally subjective, but I'd dare to say that almost nobody RTFM, even tech savvy folks first try to use the tool and check the manual afterwards, when something doesn't work or doesn't make sense. I think the percentage of people that would actually read the basic How to Ask guide before asking would be almost the same as new users who respond promptly and pro-actively to any downvoting or guidance comments.

I've checked that Server Fault and Meta Stack Overflow also don't allow anonymous posting nor asking before reading How to Ask and clicking a checkbox "thanks, I will keep these tips in mind when asking". I don't know if this can be enforced locally or is decided at higher levels.

Briefly looking at WordPress, Super User and Webmasters shows the same behavior as here in Ask Ubuntu: just click Ask Question and post it Signed up or as Guest: 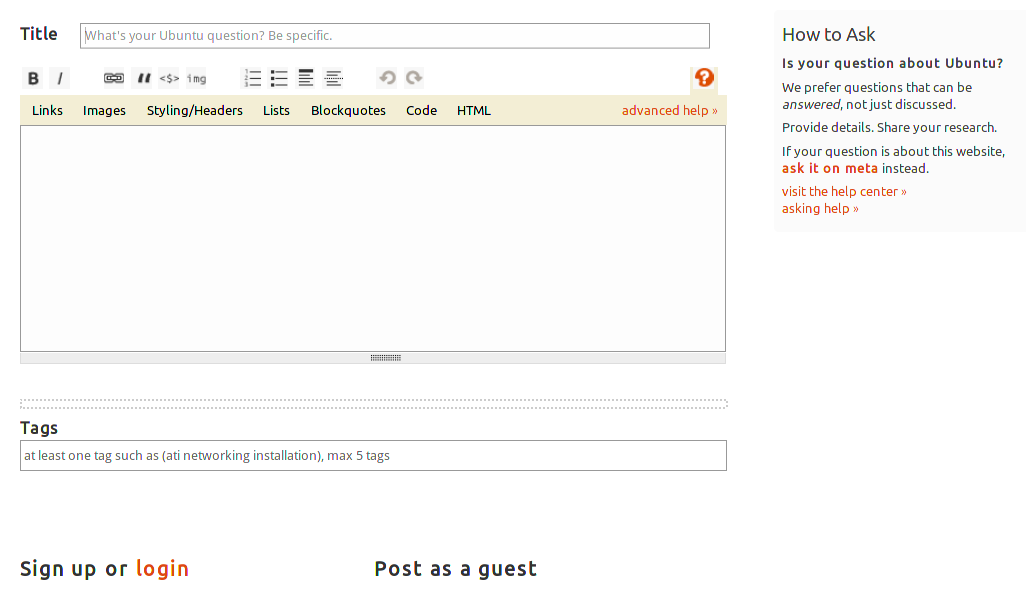 The title input field already has What's your Ubuntu question? Be specific.
That didn't prevent the Chemistry question examplified by the OP.
At the sidebar, a mini How to Ask guide highlighting: Is your question about Ubuntu?
Again, no effect on the avid asker.
Does Ubuntu even mean anything in Chemistry??

So, no. I don't think reading How to Ask should be mandatory.

Further evidence. The title input at Ask Different (Apple) has the following (my emphasis):

What's your Apple hardware or software question? Be specific.

That didn't prevent someone from asking a Microsoft (!) question:

Not the answer you're looking for? Browse other questions tagged discussion new-users .

3
Is Ask Ubuntu an Ubuntu Q&A site for everyone?
13
What do we do with users who don't want to learn?
7
New battle plan for the questions that require god-like powers to figure out user problem: Close everything on sight!
1
Why do old questions keep resurfacing?
10
The website seems to be less active than before