What windows questions are OK to ask?

The Nature of Scope Decisions

There's no way to enumerate an exhaustive list of formal rules about what's on topic and what's not. This question is extremely general. I've tried to address as much as can reasonably be addressed in one place.

Being about non-Ubuntu operating system X, whether that be Windows, Mac OS X, Fedora, Haiku, or any other OS, doesn't necessarily make a question off-topic for Ask Ubuntu. Not being about Ubuntu is what makes a question off-topic. Of course, there's still lots of room for disagreement. The FAQ addresses what's on-topic in some detail, but there's still plenty of potential ambiguity.

There will always be some ambiguity. Our goal is not to make a site where it's perfectly clear what's on-topic. Our goal is to make good questions and answers, and to help Ubuntu users. We need to have some idea of what's on-topic to serve that mission, but insisting on extreme rigidity and formality in defining our site's scope would detract from our ability to do anything else.

An intuitive way of saying that is that meta serves main, not the other way around. Policy considerations exist to make the Q&A work. The Q&A doesn't exist for the purpose of conforming perfectly to an elegant policy. Ask Ubuntu is (among other things) a game, but it's not that kind of game.

Questions About Other Operating Systems

It gets murky fast when it's about using Ubuntu to perform a technical task in another operating system. If you want to use Ubuntu to repair a Windows system, sometimes that would be on-topic, and sometimes it wouldn't. If the question is mainly about how to use Ubuntu to perform some action and you know what action needs to be performed, it's probably on-topic. If the question is what action needs to be performed, and the "...in Ubuntu" is essentially an afterthought, it's probably off-topic.

When It Comes to Reinstalling a Non-Ubuntu OS

You've noticed that this question has been considered on-topic:

While this question has been considered off-topic: 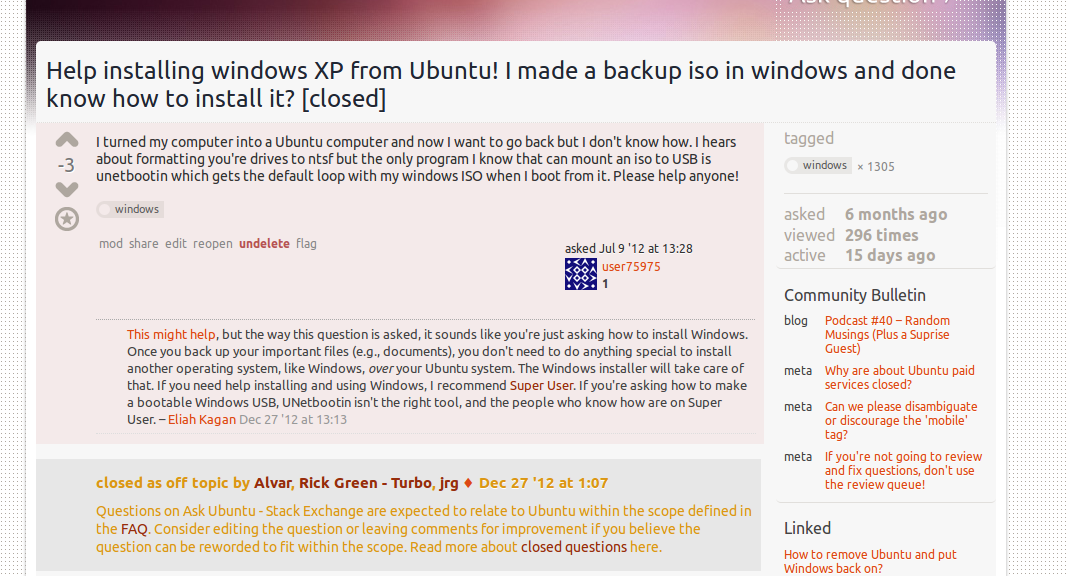 You're right to ask what the difference is. There are several, and the matter deserves some explanation.

These Questions Really Are Fundamentally Different

In the first one, while some information in the answers is specifically about Windows, the question is essentially about Ubuntu. This can be illustrated by this very creative paraphrase:

I want to go back to Windows, but this Ubuntu thing keeps coming up when I boot my machine! I've been looking in Ubuntu to find an option for removing Ubuntu, and I can't find one. Where in Ubuntu do I remove Ubuntu? Or if that's not how this works, what is it about Ubuntu that I don't understand?

You'll notice that while a good deal of that paraphrases the question, some of it I've taken from the answers. This question provided the opportunity to address those points in answers, and people took that opportunity. The answers are on-topic because they interpreted the question in a way that was (1) true to what the OP asked and respectful to the OP, and (2) on-topic. That makes the question effectively on-topic, too. When we make closure decisions, we usually take the answers into account.

In the second one, the OP is asking:

I have a Windows ISO stored in a partition that Ubuntu created. I want to install Windows from it, without burning it or writing it to a USB flash drive.

(Actually, it's a bit hard to know that's what's being asked, because the question is not very clear. That is probably one of the biggest factors that contributed to it being closed. When a question looks off-topic and we don't know exactly what it's asking, we usually only expend time and effort to find out what it's asking if we think it's likely to be on-topic.)

This question appears to be about a weird, niche way to install Windows. Only a Windows expert is likely to be able to answer this question. This question does not address a situation that Ubuntu users are likely to encounter, and it would probably be difficult to answer it in a way that is on-topic. To the extent to which an answer could be on-topic, it would probably both not address the essentials of the question, and duplicate answers to the first question.

Another possible interpretation of the question is that it is asking how to use UNetbootin to write a Windows ISO image to a USB flash drive. If it were clearly asking that, it might theoretically be considered on-topic...but we would still not likely be able to answer it, because writing a Windows ISO to a USB flash drive is not something UNetbootin is generally capable of doing, and because writing a Windows ISO to USB requires techniques that are specific to making a Windows disk bootable. Thank you for bringing this question up--while I don't think that's what's being asked, I'll comment there just in case, to get clarification about that.

Please note that I was not part of the decision to close that question in any way--I did not vote to close it, nor did I review it before it was closed. While I'm pretty sure I understand why it was closed and I've explained good reasons for closing it below, I cannot actually know precisely what the people who closed it were thinking at the time.

The First Question Serves an Important Purpose for Our Community

The first question fills an important need--before that, we had all sorts of scattered questions about removing Ubuntu and there was no clear resource about going back to Windows from Ubuntu on our site.

There was lots of duplicated effort, telling people to "just use the Windows install CD" when people were unsure what that meant or unsure about what situations constituted an Ubuntu-related problem that they should follow up with us about.

There was also the problem that some users removed Ubuntu's partitions and put the Windows boot loader back in the MBR, but didn't re-expand the Windows partition(s) that had been shrunk during Ubuntu's installation.

The first question addresses undoing the specific steps that are performed when Ubuntu is installed alongside Windows. Not only is that itself on-topic, but it illustrates what Ubuntu does when it's installed, which means one learns about Ubuntu by reading it.

Finally, one good reason to provide people with help removing Ubuntu is that we help them install it, and helping them remove it is the decent thing to do. We try to help people experience Ubuntu--the OS, the project, the community--in a positive way. We try to respect people's choices about what they do with their computers. Ubuntu is designed to co-exist with other operating systems because Ubuntu is less used than some other OSes...but also because it supports users' decisions about what software to run on their computers.

Where to draw the line?

While it's important to give people the necessary information to stop using Ubuntu if they don't like it, that doesn't mean we should, or even could, answer multiple questions about all the different ways to install other operating systems. We also cannot answer, or would be very poorly suited to answering, questions about problems that are not related to Ubuntu and arise during the installation or use of another operating system.

See Questions Here Are Questions For Us below, for more information about how we deliberately try to help questions be on-topic, including by answering them in on-topic ways (so long as it really answers the question).

Many Questions Are On-Topic on Multiple SE Sites

Many users, including yourself, have noticed that some other sites in the Stack Exchange network overlap in scope with Ask Ubuntu (as well as with each other). Most AU questions would be on-topic for Unix.SE, and most would also be on-topic for Super User. A significant minority might be on-topic for Server Fault. (That's not an exhaustive list of overlaps!)

Since there is overlap in scope, for some questions, it's easier to know they are on-topic on (say) Super User, than to know they're on topic on Ask Ubuntu. That does not mean they're off-topic for Ask Ubuntu.

When we consider closing a question as off-topic, first we decide if the question is good for our site. This is by no means official, but as I see it, the two main questions are:

We close questions for reason #1 all the time. We close questions for reason #2 pretty rarely. The most common instance of #2 is a question about programming in Ubuntu...when there is nothing Ubuntu-specific in the question. Generally speaking, Ask Ubuntu supports Ubuntu software provided in official repositories and also supports using third-party software on Ubuntu. Just about any programming task undertaken on an Ubuntu system would qualify for that. Plenty of programming questions (when they are in some way specific to Ubuntu) are considered on-topic. But most are considered off-topic because Stack Overflow is a much better place to ask a programming question when an Ubuntu community is not needed to answer it.

Questions Here Are Questions For Us

When someone asks a question on our site, it's important to remember that, for whatever reason, good or bad, they have decided to ask it in our community. It's OK to hand them off to another community in situations where we'd be doing a disservice by trying to answer their question, or situations where answering their question would not contribute to the goal of creating a wiki of good questions and answers about Ubuntu. But we don't start off assuming a question is off-topic.

A lot of what you're asking is addressed in this Stack Exchange blog post, which I recommend in its entirety. This part is particularly relevant:

Obviously, there are questions you’ll have to turn away, either because their only connection to your site is via the audience (“How do I make bread as a programmer?”), because it’s completely off-topic (“How do I cook a fish in a dishwasher?” obviously belongs on Cooking, not Home Improvement) or because they’re simply not useful or constructive. But that should be your last resort. Close questions with an eye toward improvement and re-opening, not driving users away.

Source: "Respect the community – your own, and others’" by Shog9

Not the answer you're looking for? Browse other questions tagged discussion scope .

-3
How can bash question is on-topic and C programming off-topic?

12
What is the proper usage of the windows tag?
10
What happens Once Windows 8 implements Secure Boot on ARM and pc's
14
Can we please ban unrelated programming questions?
8
Wubi, Windows 8 and 'wubildr.mbr' questions
16
Get rid of Windows answers?
0
Are Windows questions allowed that use Ubuntu minimally?
24
Are "not only Ubuntu-specific" questions on-topic?
5
Are questions about getting involved on-topic here?
12
Do we, or do we not support wubi.exe?