Hey folks who use "canned" comments: If you see one thats already there that expresses the same general idea, don't add another one. Thanks. :)

This has been happening a lot lately, and I'm pretty sure it's mainly because many people are not using the new review system in an entirely correct manner.

If an appropriate comment (canned or not) has already been posted, don't add another one that says the same thing, even when reviewing low quality posts. If no (additional) comment is needed, use the "No comment needed" option.

If you see a duplicate comment--a comment that says the same thing as a previous comment, either in the same words or different words--flag the comment.

While it's not appropriate to post a duplicate comment, you can upvote the comment you agree with. That's one of the big reasons comments can be upvoted--to prevent unnecessary additional comments from existing.

As an overview of how canned comments work, note that there are two main ways that comments get posted (semi-)automatically. Both are very good things...when used properly. 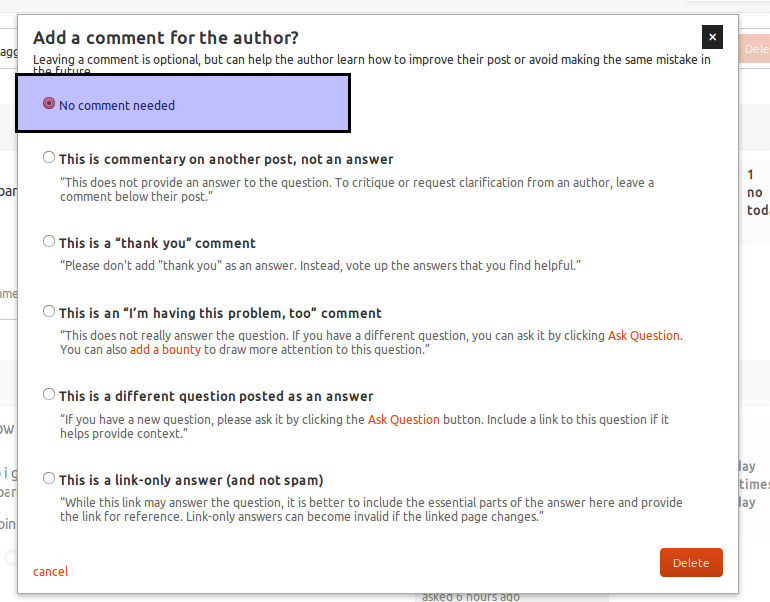 Those guidelines should, hopefully, help clarify the full range of options that exist when reviewing low-quality posts.

If you don't see a lot of duplicate comments and are wondering if this is really a problem, the reason you're not seeing them is that many of them have already been flagged, and/or removed by moderators.

If you do see duplicate comments--which means comments conveying the same information, not just comments that have exactly the same wording--flag the duplicate (i.e., the second one). Or duplicates--unfortunately, a comment is often duplicated more than once.

If I see a comment that seems to cover what I want to say I try to make it a practice to just upvote that comment and move on. This seems the logical approach to me.

I seldom go backwards so it would be rare for me to revisit a question (that I didn't answer) and notice an auto-generated comment so I won't touch that aspect. I try to clean up my own comments when it becomes clear they aren't relevant or if they seem to chatty so as not to leave a mess. (Thanks to @Seth for kindly nudging me in the right direction on that.)

6
Just a reminder for reviewers: a comment is not always needed
75
What prewritten Pro-forma (aka AutoReviewComments) userscript comments can we use and share?
6
How can a new user escalate an old unanswered question?
7
"This is commentary on another post, not an answer" used for low quality answers
6
How does this happen? Or When to comment on an Answer?
2
Deleted comment left a notification
3
Let's reopen this Wubi question that Microsoft Windows thought was off-topic
0
Should I flag pure shell command answers as "link only answer"?
0
Better handling of marking duplicate questions?

75
What prewritten Pro-forma (aka AutoReviewComments) userscript comments can we use and share?
5
unsaved comment edits are lost when showing new comments
6
Why does Recommend Deletion have an option for link-only answers?
13
Suggestion: Use pro-forma/"review" comments when flagging certain answers
9
LQ Review: Add canned delete comment for link-only within askubuntu.com (should have been flagged as duplicate)
4
Were the "pre-canned" comments intended to be brusque and condescending? If so, why?