Is it safe to download links from Ask Ubuntu?

I don't know if this is the right place to ask this, but I haven't seen it answered anywhere. More than a year ago, I was asking Ask Ubuntu about having a desktop shortcut to Google Calendar on Ubuntu 20.04. I received a few answers, but I was unable to get them to work. I confessed my ignorance of computer use and got some more suggestions, which I still couldn't implement, so I gave up.

Then a few days ago, I got a new answer:

You can use Calendar Indicator instead.

When I tried to install the downloaded app, Google blocked it, saying it is unsafe. When I clicked on the Calendar Indicator pop-up's Privacy link, the site could not be found. I'm now wondering if I've been sent to a dangerous download, or is it just Google wanting to control everything? Is there anything Ask Ubuntu can do to keep malicious links out? If a bad link is posted, will someone notice it and send an alert?

Ask Ubuntu is moderated by community members just like you.

Questions and answers also come from community members. Not all answers are good answers. An answer doesn't have to be outright malicious for it to cause harm. If you follow bad advice from sources that are not knowledgeable or authoritative, you can create problems. Similarly, if you follow advice that doesn't apply to your situation, or if you don't apply solutions faithfully, you can cause problems.

If you see a bad answer, you can comment with an explanation why it's bad. You can also vote down.

In the end, you are ultimately responsible for what you download and execute on your system. You need to exercise just as much caution here as you would anywhere else.

I strongly recommend that you don't blindly run commands or perform actions when you don't know what they do. Yes, those actions could be malicious; but more likely, you'll have problems because you really have no idea what you just did or how to reverse it. If you don't know what something does, then research it until you do.

I see that @Nmath and @NotTheDr01ds have beautifully addressed the more global issues raised in this question. I have nothing extra to add to their excellent comments so I will just add a few thoughts about the answer itself that triggered the more general questions.

I ran the commands listed in the answer in a 20.04 VM and all went smoothly until I attempted to connect to Google, and then I saw the same warning that @Frank P spoke of: 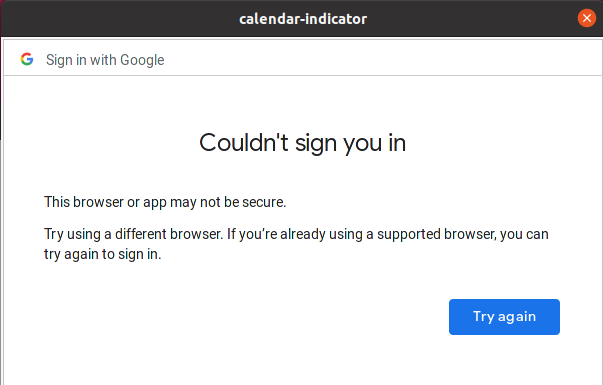 Now I note in your post here on Meta you stated:

When I tried to install the downloaded app, Google blocked it, saying it is unsafe.

Not completely correct as Google has stated that your browser or app as not being unsafe but instead that it 'may not be secure'. I suspect that Calendar-Indicator has not adapted to changes at the Google end which relate to security standards for apps that use their service. My own experience of these changes over the years (as a mutt and Gmail user) has been:

Somewhere in these changes it seems that Calendar-Indicator has lost its ability to access Google. There have been 3 bugs filed on this with the developer:

Unfortunately the developer has not yet responded to any of these bug reports.

So for this specific answer, as has been suggested, the solution is to leave a reference to this Meta question and answer in the comments (or perhaps merely reference in the comments the unresolved bugs on the developer's bug tracker). And then vote down, in this way the Community has registered its opinions. All of this after the lock on the answer has expired, this will allow time for any further discussion on issues raised by the question or answers on this Meta thread.

And thanks for bringing the issue to Meta!

I fully agree with @Nmath's answer, but I'd add that you should take two actions to help the community yourself:

As @Nmath said, we as a community are the ones who moderate it, and you're part of that community. Please make sure to do your part to help others by taking action on that answer based on your experience!