I am not able to ask questions on Ask Ubuntu

I am a new ask ubuntu user and recently I just asked only 1 question on it about my computer being stuck. I was flagged for duplicate / off-topic questions. My question was deleted.

It was actually on topic but if it was even off-topic then I also should get another chance to ask a good question. whenever I go to ask questions I get the prompt that I can only ask 1 question per 1 week. That's is unfair.

I have given really good answers by then (at least I can answer and help the community). That is why I have 108 reputation(not counting the association bonus). So that can be a reason to give me the privilege to ask questions. If you won't believe that I have only asked 1 question then moderators can check it.

Edit:The error I am getting - 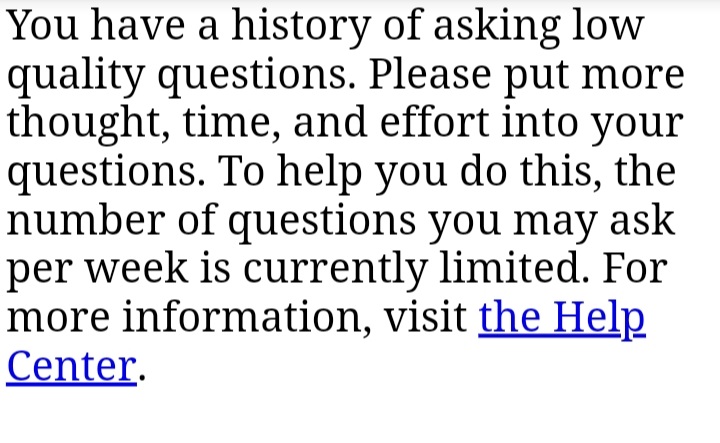 There's nothing we can do - the limit is automatically imposed by the system and can't be lifted by mods.

By the way, you can ask 1 question per week, apparently.

See this post which describes the thought behind this particular question limit.

I'm a bit surprised that this happened after asking only one question*, but the only thing you can do about it is to try to make sure your next questions are good. You chose to delete your question - deleting makes things worse, not better, with regard to bans and limits. Your question could probably have been closed as a duplicate instead and in that case I doubt that you would have run into the limit.

* note that these limits and bans are meant to be against the user rather than the account, so it's possible that activity from another account or someone else sharing your IP address could affect them

7
Is this the right place to ask a question about installing another OS on an Ubuntu computer?
4
How does this user has only 100 rep after association bonus without any posts?
13
Can we create a "template question"
16
Get rid of Windows answers?
1
Should one close questions as duplicates of closed questions?
3
Why are higher ranked users not flaged for off-topic?
3
Can we ask questions about Debian and Ubuntu-based operating systems on Ask Ubuntu?
3
I'm apparently in danger of being blocked... with the most votes being cast on a recent question +1