THREAD NOTICE: This issue has been raised to Mark Shuttleworth, the Ubuntu Community Council, and the Ubuntu Technical Board via this email message (TB is the only public archive version of the email). You may wish to wait for official governance and definitions on "End of Standard Support", "End of Life", UA-I, and ESM from Canonical, the Technical Board, and the Community Council on this matter before officially deciding a policy change here on Ask Ubuntu.

I have searched Meta and could not find a specific answer to this question.

Another question: Can you play java minecraft on a linux 1gb ram ubuntu 14.04 computestick?, was closed as off-topic, claiming "end of life Ubuntu release".

Referring to Ubuntu Wiki page: https://wiki.ubuntu.com/Releases, I see that Canonical clearly states that 14.04 LTS End of Life is April 2022.

Referring to Ask Ubuntu Help page: https://askubuntu.com/help/on-topic, states: "Support for versions for Ubuntu releases past their Support or "End of Life" (EOL)", (not past "End of Standard Support"), are off topic. The Help page makes no mention of ESM versions being disqualified.

Extended Security Maintenance is free for personal use: https://ubuntu.com/advantage

Will someone please present official documentation to clear this up. Not just hearsay, "I heard from a friend of a friend's friend", or "everybody knows this" or old wives tales, etc. Give actual facts please.

I do not understand why some users want to have so much control over what other users do, it does not reflect kindly on the Ubuntu community.

You're right that the Ubuntu wiki uses the term "End of Life" in a way that supports your argument, i.e. it says that Ubuntu 14.04 will be EOL in April 2022.

From this I conclude that Ubuntu 14.04 is EOL, and Ubuntu 14.04 is not EOL, and therefore, everything is true; in particular it is true that we currently have a policy that is not really possible to understand or consistently apply.

Thomas Ward has asked Canonical to clear things up, and they have said that they are working on the public definitions.

In the meantime, I think we've all been using the method described in chat by terdon to decide what old releases are off, topic, that is:

Has @ThomasWard posted an EOL notice about this release on meta? If yes, it is off topic and if not, it isn't

Also in this long meantime of EOL being poorly defined, Thomas Ward has argued that we should support those versions of Ubuntu that Canonical say are in Standard Support according to the wiki page. Perhaps we can consider ourselves part of Standard Support, although, as Thomas Ward wrote

there has been increasing confusion as to what "standard support" means, and how it applies to community support mediums such as IRC, the Forums, Ask Ubuntu, etc

He has also proposed rewording or clarifying the policy we have to use a clear definition of "standard support" instead of relying implicitly on Canonical's confusing definitions of "end of life". This seems like a significant improvement on the current situation to me.

But I would like us to take this opportunity to consider what our currently incoherent EOL policy is trying to do, what it's actually doing, and whether/why we do want to continue with that.

I thought the justification for closing questions about (supposedly specific to, but in practice just all of them unless someone appeals a closure on meta) old releases was that we want to strongly encourage people to upgrade, because old releases are insecure. I feel the existence of ESM does challenge that justification, as you have argued, especially if ESM is free. Personally, I'm not convinced that libraries being old leading to compatibility issues with new software and whatnot is a good reason to declare questions off topic. The "it's for your own good" argument seems to me just not at all in the spirit of software freedom at that point, though of course we're not actually stopping people from using old releases by closing questions about them, just making it harder, and maybe I might be able to persuade myself that that is the right thing to do.

Seeing what happens on the site, it does look as if people here want there to be a policy that allows questions about old releases to be closed. It does serve the purpose of getting this tricky question off my plate. 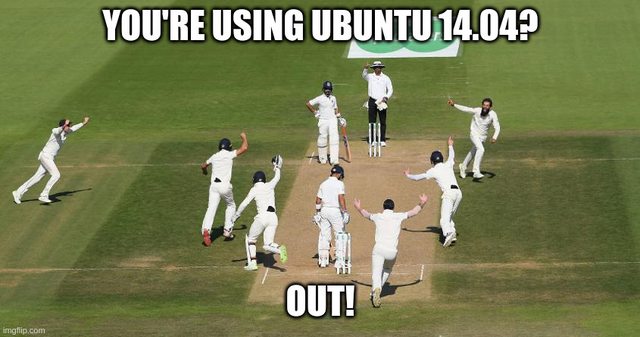 One thing on my mind when trying to consider this question of what versions we should support is that, we are not tech support, or customer service -- we are a Stack Exchange community, and we are "working together to build a library of detailed answers to every question about Ubuntu.". Nobody here is in any way obliged to answer any particular question, about 14.04 or any other release, and the question here is not, do we want to answer these questions, but, do we want to actively prevent them from being answered? The answer to this can totally be yes, like, "yes, because we want to strongly encourage people to upgrade as it's in their own interest" or "yes because our community can't reasonably be expected to address issues people have with ancient releases", but we do need an answer, especially as the votes on this meta question about closing questions about EOL releases and the one it's closed against suggest that it's a fairly unpopular policy, at least among the small subgroup of our community that uses meta, or has done so over time.

In practice, questions about Ubuntu 14.04 are off topic on Ask Ubuntu, but the policy behind that practice is in great need of revision, one way or another. Thank you for challenging that policy and reopening discussion about it, pushing for things to change for the better.

14.04 has gone End of Life for the purposes of Community Support, which makes most questions about it (other than how to upgrade to a newer release) offtopic here on Ask Ubuntu.

ESM is generally a paid service which provides extended security updates but only security updates, and not long term bug fixes, support for other software, etc. It is designed to let you use the old systems for a short period of time so you can work on migration, not so you can continue to use outdated systems.

If you are using 14.04, it's End of Life from a Community Support perspective - including here on Ask Ubuntu. To get continued 14.04 support beyond its EOL date you need to pay Canonical for the Ubuntu Advantage solution for paid support for 14.04 and endpoint systems (and that gets pricey quickly).

Some notes on this:

When ESM was announced for 12.04 and 14.04, the definition of "end of life" for the release per ESM is later. However, Standard Support means the primary support mechanisms of the Community, Ask Ubuntu, and other primary support mediums such as the IRC systems.

Indeed, the IRC channels and tidbits even say this:

While the ESM repositories may be free for a limited number of personal machines for use, this does NOT include paid support from Canonical - any actual support under ESM has always, and should still be, Paid Only, meaning that for actual support under ESM you need a paid contract with Canonical - the ESM repositories may be 'free' but that does not extend to the Paid Support service.

If you really want to argue this, then you need to approach the Ubuntu Community Council and Canonical with your argument, because we tend to follow the guidance of the other support mediums that're maintained by the official governance teams.

ALSO to quote the blog that was linked by CS Cameron earlier:

For Ubuntu 14.04 users and UA Infrastructure customers to get started with UA client, visit ubuntu.com/advantage and please contact support** with any questions.

... and Essential comes with no paid support: 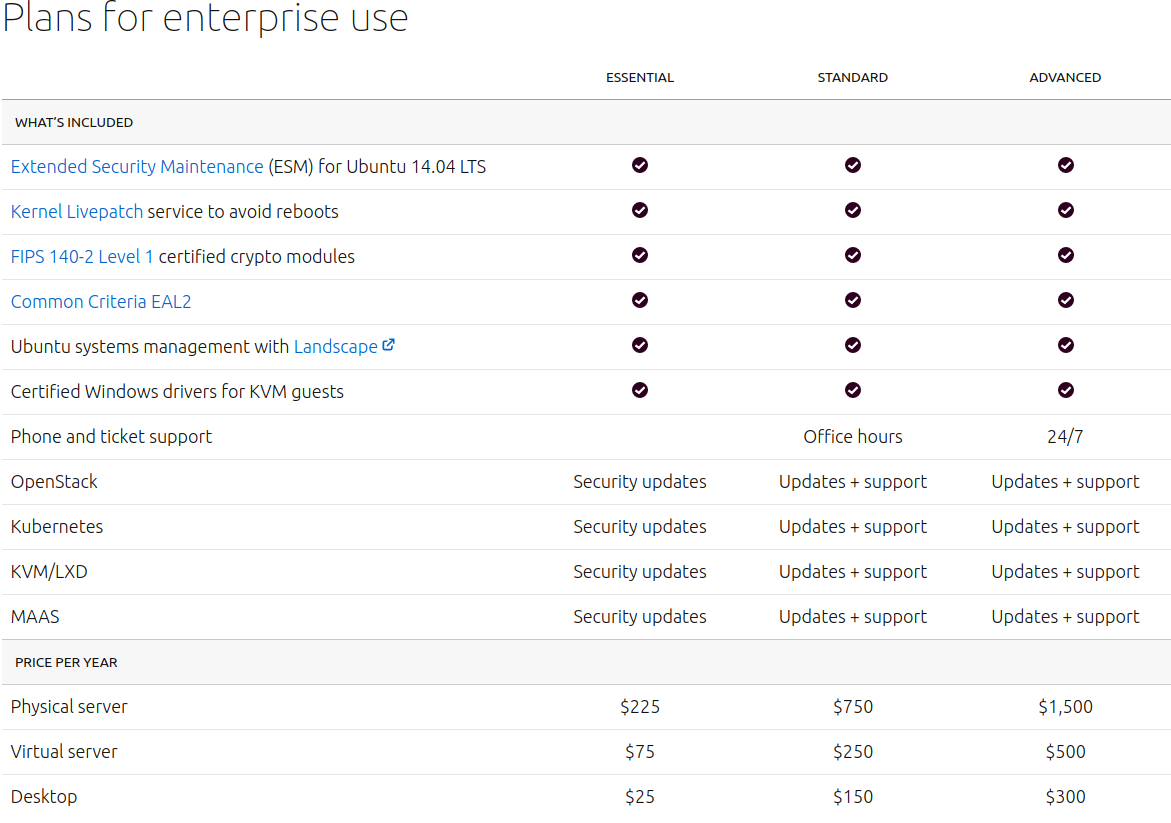 ... so in order to get continued support from Canonical you need to pay for Standard UA-I.

Just to help visualizing the issue at hand, I include this helpful illustration from the Ubuntu release-cycle page:

According to Ask Ubuntu, a release of Ubuntu is only off-topic if it is past EOL.

These two facts should be enough to establish beyond doubt that Ubuntu 14.04 is not off-topic on Ask Ubuntu.

Some people have claimed that when Ask Ubuntu says EOL, it really means "End of Standard Support". (as if Ask Ubuntu does not understand what it is saying).

I started out by installing an Ubuntu 14.04.4 ISO I had in my downloads folder. (I probably should have downloaded ubuntu-14.04.6-desktop-amd64.iso from https://releases.ubuntu.com/14.04/) . At this point we at least know for a fact that the downloading of 14.04 Desktop and Server is fully supported by Canonical.

During the install process I selected the option to download updates while installing. I think that if I would have used point release 6, there might have been fewer updates and the process might have gone faster.

It was a pleasure to log into 14.04 after so long, sort of nostalgic.

First priority was security. For 14.04, this means signing up for Ubuntu Advantage (UA) client and installing ESM.

The Ubuntu wiki page for information on installing Ubuntu ESM is https://wiki.ubuntu.com/UA client. the page directed me to https://ubuntu.com/advantage where I completed the registration process and ended up with a free token.

Back on https://wiki.ubuntu.com/UA client I continued with Installing the UA client by running a couple of commands as instructed. Next I proceeded to Attach the UA client. I ran the line I got when registering sudo ua attach [UNIQUECODE], (Please use your own free token).

Running sudo ua status I confirmed that ESM was enabled.

I completed the upgrade by running sudo apt update and then sudo apt upgrade. The installer ran for quite a while.

I ran Software Updater and It installed quite a few security updates. All Settings/Overview tells me System Up-To-Date.

It appears to me that Canonical is truly supporting Ubuntu 14.04 for free. The question is whether Ask Ubuntu will also continue to support Ubuntu 14.04 until it's End of Life as claimed on the Help page?

AND EVERYTHING WAS FREE

Not the answer you're looking for? Browse other questions tagged discussion end-of-life off-topic .

32
Should we allow questions that are about releases which are considered End of Life?
16
Policy Change Proposal: “End of Standard Support” for ESM releases is effectively the “Not Supported” date for a release on Ask Ubuntu
16
Should questions about using end-of-life Ubuntu releases be closed?
20
Is it the time to redefine “end of life”?

13
EOL Notice: Raring (13.04) is now past End of Life
40
EOL Notice: Vivid Vervet (15.04) is now EOL as of February 4, 2016
20
Is it the time to redefine “end of life”?
6
Close Voters: Questions about upgrading EOL releases aren't off-topic
9
Is it acceptable to copy other user's common, moderation-related comments?
16
Policy Change Proposal: “End of Standard Support” for ESM releases is effectively the “Not Supported” date for a release on Ask Ubuntu