Currently, AU only has a defined migration path to Meta: 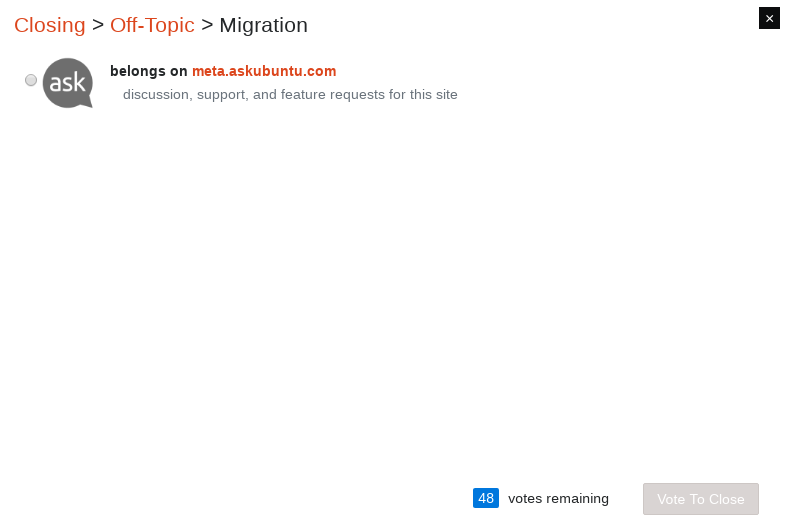 Why is there no migration paths defined for U&L SE, and possible the ElementaryOS SE as well? To me, it would make more sense to be able to vote for moving than closing questions related to non-official derivatives of Ubuntu - and I believe it would benefit the users as well.

As it is we have to advise users to delete the question on AU and re-post on the appropriate site. Moving would offer a better exprience, especially to new users of both AU/SE and Linux.

First up, we can migrate anywhere, it just takes a bit of teamwork. If you think you're looking at a great question that has already had some great answers, flag it for a moderator. We'll likely* agree and kick it over.
*Depending on your criteria, obviously. If we can fix it, we would probably try that first.

Otherwise I'm not sure what's changed since last time...

So all in, the cost of open migrations is —in my rather unhumble opinion— high, for very little reward. Where there is genuine and obvious benefit to be had, just issue a custom flag and we'll weigh it up.

Speaking as an ex-mod here and current mod on U&L, and having seen the kind of question that is often suggested for migration, I can assure you that opening this path would be a horrible idea. Quite frankly, most questions that are flagged for migration are usually off topic on U&L, or just very bad questions.

In my ~3 years as a mod here, I don't think I migrated more than 5 or so question to U&L. It just doesn't happen very often. The vast majority of cases where an OP doesn't realize this site is Ubuntu only, they also haven't bothered to craft a useful question. Questions that are worth migrating are so rare, it is simpler and more efficient to just flag for mod attention and ask for migration. Or, much, much better: just leave a comment to the OP suggesting they delete their question here and ask it again on the target site.

Migrations are next to useless as implemented. The question retains its original date, so it doesn't appear as new on the target site, it is very confusing for users and especially those with no account on the target. The whole thing is just more trouble than it's worth. So no, moving would absolutely not be a better experience for the user, more often than not, moving results in an orphaned question.

There is essentially no benefit whatsoever to opening a migration path and there are significant downsides.

18
Activate migration paths to Unix and Linux, should we?

3
Are questions about design decisions considered constructive?
0
I think closing questions on Ubuntu derivatives as off-topic is unhelpful
1
Should we answer questions regarding games played via wine?
2
Tag creation request: [hybrid-efi]
8
How to resolve conflicting information about "Chrubuntu" policy/status?
9
Please ask people to translate, don't just close a question
1
What are the differences between Ubuntu and e.g. Mint?
15
Do we support snapd on other distros?