Reject buttons looks too much like an ok button

I got the following notification inside my inbox:

I clicked on the notification and got to the following page:

Because it was an edit suggestion to my own question, and it was already approved, the UI only showed 1 button. 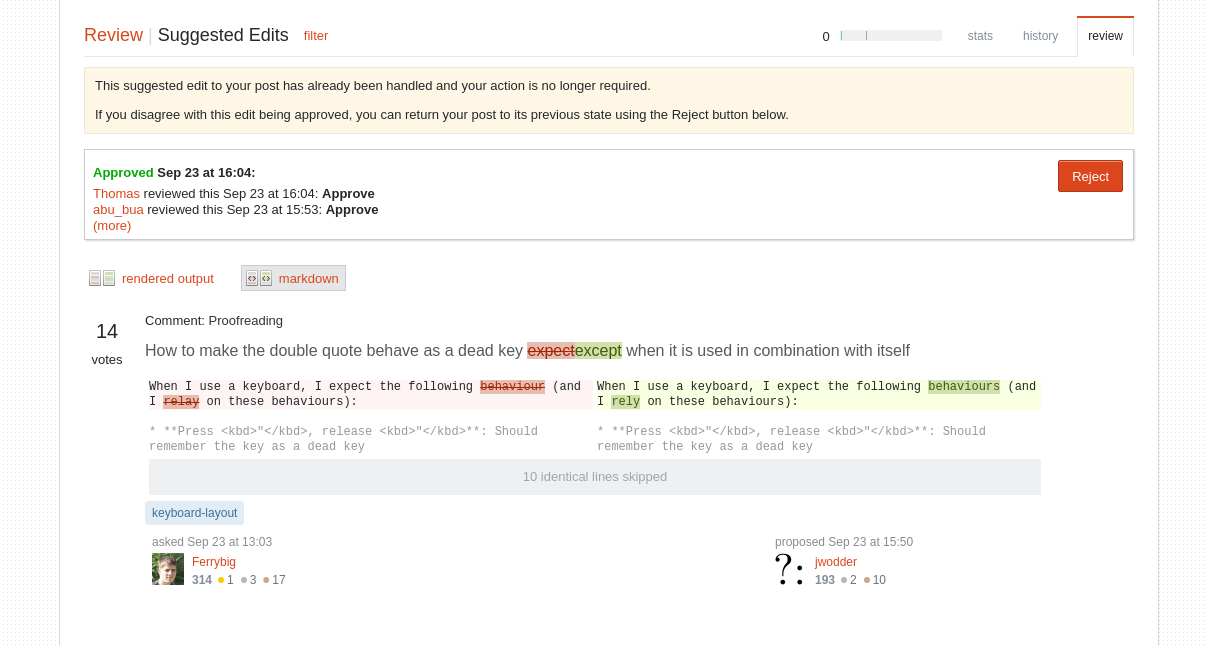 Because the UI only shows 1 button, I though instinctively that it was an "ok" button, but just before I pressed it, I saw that the actual text was reject.

While I avoided the "disaster" in my case, I can quickly see how someone with less attention may confuse the button for an "okay" button, and press it accidentally.

Yees, I'm totally agree! When there is only one button, usually it is a Confirm (positive action) button. The first time, when I opened the screenshot, I didn't read anything, I just saw Next or Skip button or something like that.

Something more it sounds or looks like this case is against the latest SE's policy of kindness. Here we can't agree with the community's meaning and can't contribute to it by further improvements.

IMO, the standard Review|Suggested Edits form, which has all the necessary features, should be applied here.

Just a notice to the moderators: This question currently has 35 up-votes here, it, probably, will be more worth on Meta SE.

The second line of text in the yellow box above the review area is supposed to explain what you're doing in this case, though I can understand if a lot of people skim it in preference of the bright red buttons.

A brief explanation, for those who may be unaware (skip past the bullet points if you're familiar with this):

When you are the person whose post has been edited through an edit suggestion, you have the option of overriding the review process in either case (assuming the post hasn't been edited in the interim).

So, what we may need to do is change the button to say something that relates more obviously to the review, not the edit, as that's what you're actually rejecting/approving.

We could then reword the yellow box to say something more like:

Having both options also lets the OP specifically weigh-in on the edit in both cases and effectively "closes" the issue.

Not the answer you're looking for? Browse other questions tagged discussion design user-interface .

18
What to do about good suggested edits with very bad summaries?
6
Am I penalized for trying to "improve" a test edit?
1
There are questions being closed as EOL when they are still supported
9
Close voters: we have a Reason for that (EoL posts are not necessarily duplicates)
8
Do we engage in too much `gksu` bashing?
25
OP rejected my edit and then copy-pasted it
0
Should I re-suggest edits that I feel were wrongly rejected from the review queue?
6
Some new weird review ban