Should the NVIDIA bug question be made a community wiki?

NVIDIA screwed up and pushed some buggy drivers, affecting many users who are coming to AU with the same issue:

The question has a list of affected cards at the end: 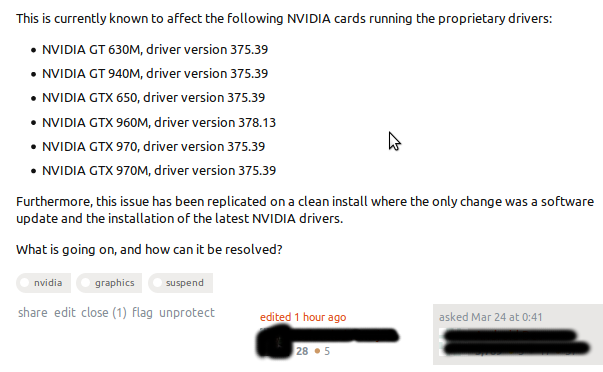 Someone has proposed that this question be made a community wiki, so that this section could be more easily edited (I don't agree but I've been invited to write the meta question - see my answer below).

In chat, the person who wrote the NVIDIA question agreed with me that there was no benefit to making this post community wiki. Most of those who answered it have not, as far as I know, given their views yet.

(this can only be done by mods, so last call is with them)

Note: it has also been suggested that the question should be closed as a bug report. I fear my question would be too broad if I also invited discussion on that, but I will edit if people think it should be included

There's no compelling reason to make this post a community wiki.

The argument that it would make editing easier has very marginal traction I think, since anyone can suggest an edit and the Suggested Edits review queue is very fast moving (moreover, the person who last edited it to add their card does not have enough rep to edit CW posts without review, so it would have made no difference to them or to reviewers if the post were CW), and lowering the bar to edits being audited is not a particularly good idea in my opinion - we check the quality of edits for very good reasons.

The post does not have many possible answers (in this blog post on community wikis, Grace Note argues that, while there is very rarely a benefit to making questions community wiki, the status could be used to suppress a post that is growing out of control) and is now protected to prevent '(me too|thanks)!' answers being posted. The proliferation of similar answers is mainly due to another question having been merged into this one, and new, bad answers are not appearing.

The question author and people who have answered have not expressed any wish to make the post a community wiki and would be, in one stroke, prevented from gaining any further reputation from it. I don't think suppressing reputation gain makes any sense as a reason to make this post community wiki, and the affected users may well be upset.

It seems to me that the only argument for making the question a CW is that it will be easier to maintain a list of card x drivers affected by this. Let's examine that.

Of the six 12 listed currently, 5 were added by a 20k user, 6 by OP and just one was added via a suggested edit. One edit out of 7 revisions. That's not enough to argue that the post should be made CW for making editing easier. Even CW posts need 100 rep to edit, at that level, the user can easily comment on the post if they don't feel like editing, and OP or any 2k+ user can edit that in.

I would rather the list, if at all we need a list1, be maintained in an answer. A single answer can be made CW quite easily, is just as included in search indexes as the question and most importantly, doesn't affect any of the other posts in the question.

1 Just considering that 6xx models are affected implies dozens of cards spanning years would be affected. Nobody, not even the users we're so worried about, is going to maintain such a list.

There's no compelling reason not to make the post Community Wiki

First off, turning a post into a community wiki makes the post belong to the community, which is something that has been done with a decent number of masterposts. As this post is also a masterpost now (look at its timeline, it has had countless questions closed and merged into it, it would make sense that this question follows suit. Grace Note's post on the SO blog is not set-in-stone policy, but only a guideline that individual sites (or even moderators/users) can choose to follow/ignore as they see fit.

Secondly, it keeps trivial edits (such as adding cards or example images) out of the review queue. Low-quality edits aren't that big of an issue -- rollbacks exist, and the masterposts that are already community wiki aren't vandalized often. While, yes, the edit queue is fast, it still isn't a good idea to clog it with edits that don't need reviews. This comes even more into effect when you realize that editors are supposed to verify that information edited into posts is factually correct (although everyone seems to ignore that rule for the sake of brevity). With a CW, there's an implied trust that users know what they're talking about (which is, in fact, the concept of reputation).

Being a community wiki doesn't encourage bad edits or answers any more than a regular question. In fact, to that regard, I've already protected this question as there has been at least one case of a "me too!" post, and I can only see that number growing as time goes on.

We're already breaking plenty of rules with this post (for example, it should be closed as a bug, we're allowing edits of new cards/examples, and so on), so it's obviously a special snowflake. According to our own edit rules, further examples and cards should be blocked as an "attempt to reply," but this behavior is tolerated here precisely because this is meant to be a canonical masterpost.

Finally, there's the question of symbolism. This question has been asked by many people, each adding their own little spin on to the original question. Putting this question into the ownership and control of the community can only benefit it and make the question better and easier to find.

5
What should we do when a question would make a perfect wiki, but...
4
Could we migrate outdated answers to community wiki mode?
5
Community Wiki bounties should be split
1
Why don't we have a Community Wiki Section or a Community wiki tag in Questions menu for their easier access
2
In answers attributed to "community wiki", what does the percentage value denote?
4
Is the "community help wiki" the same as "community wiki" on Ask Ubuntu?
0
different hardware - different solutions despite of one topic like e.g. nvidia
10
Handling questions about the Bay Trail c-state bug
9
Re-working another user's answer?