Ask Ubuntu's favicon is too similar to the inbox alert

An example of this is in Firefox when the tabs are set to appear at the bottom of the top panel and Ask Ubuntu is opened in the leftmost tab. The following might be mistaken for an inbox alert:

Notice that if you look a the image above from the corner of your eye the favicon and inbox alert (the red circle with '1' in it) they look identical.

Also note that this also happens when viewing other Stack Exchange sites and the Ask Ubuntu site is in the leftmost tab. Super User:

Does this problem need to be solved? If it needs to be solved, what can be done to solve it?

Whilst at first glance I nodded and went "hmm, this isn't ideal", I think it's something you're going to have to live with:

However, what really makes me think that this isn't worth fussing over is best shown in a screenshot: 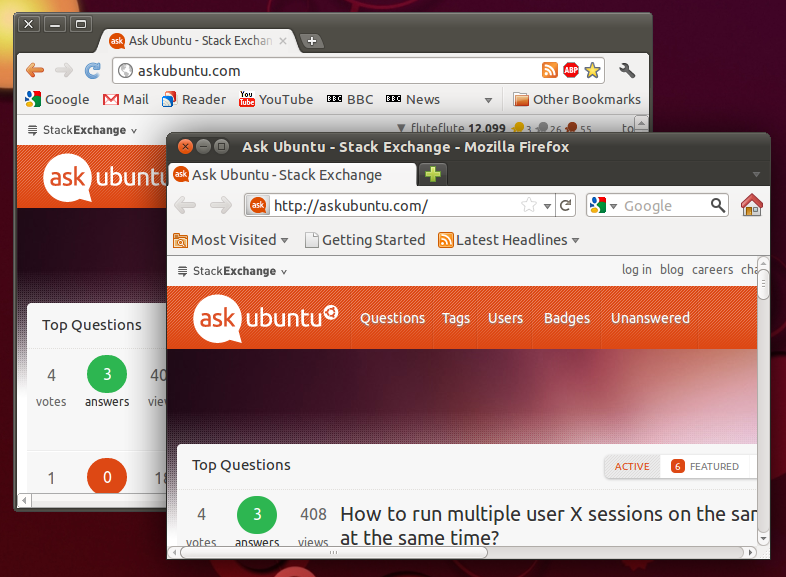 By default then both Chromium and Firefox (which I think are probably the most common browsers for Ubuntu users) have the URL and navigation bar and bookmarks bar between the tabs and the page content.

Therefore screenshots and situation you described regarding "Firefox when the tabs are set to appear at the bottom of the top panel and Ask Ubuntu is opened in the leftmost tab" is simply very unusual and unlikely to be experienced by most users.

It's not something worth changing.

Changing the favicon because of such a small issue sounds silly to me. If you need to be notified of new inbox messages, consider the next Stackapps:

If you want to, I can create a userscript that colors the whole bar red on new inbox messages.

13
Please disable displaying a tag at the start of page titles
28
Clean-Up Week - Event planning
13
Can we get an inbox message when a question we ask is marked as a duplicate?
1
Can we reword the Too Localized close reason?
4
Can we suggest posting on the forums for too localized?
11
Use browsers' user-agent to alert users they might be on the wrong site
16
Question Template in Help Center