Is it "undesireable" behaviour" to offer a script as a solution?

In many cases, problems can be solved, or at least worked around, by making a small script. I am very well aware of the fact that this site is not a script-factory and people should not expect other users to write scripts for them. On the other hand, I simply like being creative in writing small solutions where it can be done easily.

This is something I have been asking myself for some time now. Especially a downvote of this answer made me wonder if such "behaviour" is unwanted, since I cannot think of another reason; I tested it completely and it works fine as far as I can see.

What is the general idea about writing small scripts, not because people should expect it, but simply because you like it?

I think that small scripts to answer a question are okay, but there's a few things you should mention.

It should probably be made known publicly that using any script means that you are using the script and accepting the potential risk of your system being damaged in the process because we do not vet any scripts at all for security risks and such.

I think the answer below (originally this answer of yours) is a good example of why people don't upvote them. While I'm sure the script does what you say it does, you are giving 8 lines of Python code that need to be saved as a script and then run for something that can be done in a single find command.

As a general rule, giving scripts for things that can be solved with standard commands or simple one-liners feels like using a tank to kill a fly. It works but it is really not worth the effort. It reminds me of an answer I can't seem to find anymore where the answerer was bragging about having "ninja'd" for providing a C solution to a text parsing problem O_o. The thing probably worked but C for text parsing?

I feel kind of the same way with many of your answers which provide what I'm sure are good scripts but which are attempting to replace basic UNIX commands and so are serious overkill. I wouldn't downvote any of them and you are free to provide them if you enjoy it but if that's the kind of thing you like, you might have more fun on SO. 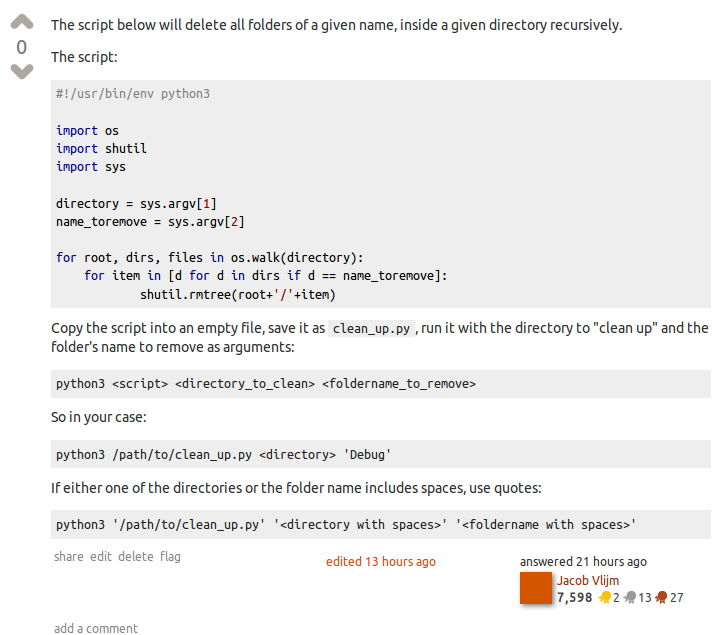 3
Help me formulate this question:
73
Style guide for questions and answers
16
Downvoting and/or closing a question about faking bittorrent
13
Encouraging (new) users to accept answers
24
Why are questions no longer titled as questions?
8
What is your opinion about outsourcing larger scripts from answers to GitHub repositories?
5
Seek the difference